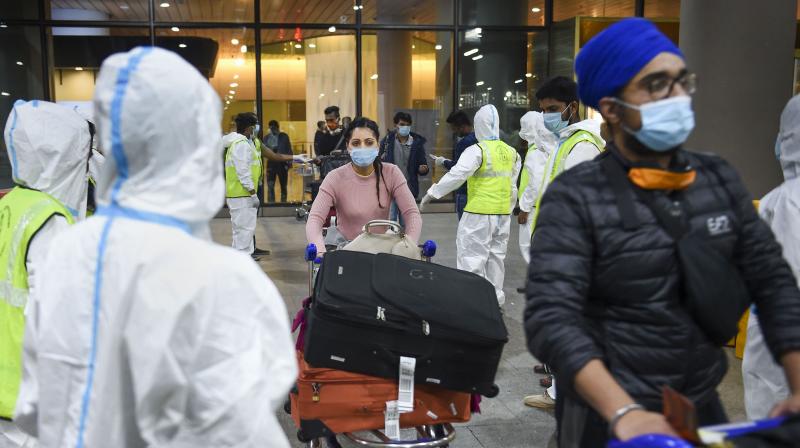 India has been on the Red List since end-April when the Delta variant was at its peak. (Representational image: PTI)

London: The UK on Sunday eased travel restrictions for India by moving the country from its "red" to "amber" list, which means fully vaccinated Indian passengers will no longer be subjected to a compulsory 10-day hotel quarantine on their arrival in Britain.

The Department of Health and Social Care (DHSC) has confirmed that all arrivals from India who have been vaccinated in India, which is on the amber list as at 4 am local time on Sunday, are required to isolate at home or their designated location mentioned on the compulsory locator form.

While the requirement for a compulsory 10-day self-isolation in a government-approved facility at an additional cost of 1,750 pounds per head will no longer apply, only travellers vaccinated in the UK or Europe would qualify for an exemption of the home quarantine requirement.

We recognise there are a large variety of COVID-19 vaccines being administered worldwide and work is ongoing to determine which non-UK vaccines and certification solutions to recognise, a DHSC source said.

There had been some speculation over Covishield, the Serum Institute of India made Oxford/AstraZeneca vaccine, being considered within the wider UK-approved vaccines ambit.

However, the government has clarified that the India-made version of the Oxford/AstraZeneca vaccine so far approved by the UK's Medicine and Healthcare products Regulatory Agency (MHRA) is branded as Vaxzevria and that is the only one currently recognised under the exemption rules.

Under the legal rules for countries on the amber list of the UK's traffic light system, passengers must take a COVID test three days before departure and book in advance for two COVID tests to be taken upon arrival in England as well as complete a passenger locator form on arrival.

On arrival in England, the passengers must quarantine at home or in the place they have confirmed as their location for 10 days and take a COVID-19 test on or before day two and on or after day eight.

Under-18s and those fully vaccinated in the UK are exempt from the home quarantine, as well as those who have received both jabs in the EU and US.

Also exempt are those fully vaccinated in the UK or under the UK vaccine programme overseas; under 18 on the day you arrive in England and resident in the UK or in a country with a vaccination programme approved by the UK; and part of a UK-approved vaccine trial.

However, under a bilateral agreement between the UK and Indian governments, a limited number of flights between India and the UK continue to operate.

Airlines have reported a massive surge in bookings soon after the announcement of India moving off the Red List was made on Wednesday, a move overwhelmingly welcomed by the Indian diaspora in the UK hoping for India visits during the ongoing summer break in the country.

India has been on the Red List since end-April when the Delta variant was at its peak, which meant an effective ban on travel except for returning British residents who had to self-isolate in a government-sanctioned hotel at a considerable additional expense.

The update of the travel list this week came alongside an announcement that the cost for solo travellers from destinations still on the Red List staying at a quarantine hotel will go up from August 12, from 1,750 pounds to 2,285 pounds. The charge for an additional adult sharing a room will increase from 650 pounds to 1,430 pounds.

According to the government, this is to "better reflect the increased costs involved".