The meeting offers a glimmer of hope that all may not be lost in Sino-Indian ties as the two nations refuse to blink first near the Sikkim border. 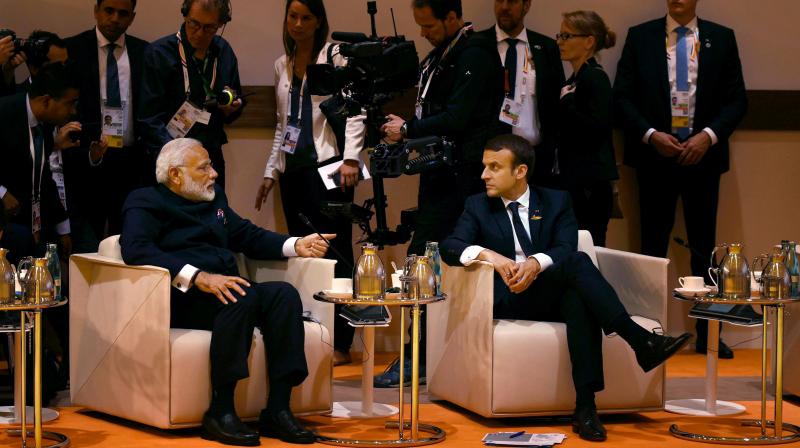 New Delhi/Hamburg: Prime Minister Narendra Modi and Chinese President Xi Jinping “had a conversation on a range of issues” separately at the Brics leaders’ informal gathering in Hamburg, hosted by China on the sidelines of the G-20 summit, the external affairs ministry said Friday even as the two leaders praised the contribution of each other’s country towards the Brics forum. It is unclear whether the contentious Doklam faceoff at the border found any mention during the conversation. Later, a report by China’s state-run Xinhua news agency said President Xi had called on the Brics countries to “push for peaceful settlement of regional conflicts and disputes, and to consolidate the role of the G-20 mechanism as the premier platform for international economic cooperation”.

A photograph put out by the MEA of the Modi-Xi “conversation” showed the two leaders standing and shaking hands, with some Chinese officials looking on with grim faces. While Mr Modi was shown greeting Mr Xi warmly, the Chinese President put on a half-smile. The meeting offers a glimmer of hope that all may not be lost in Sino-Indian ties as the two nations refuse to blink first near the Sikkim border.

China had indicated earlier on Thursday that a pre-scheduled bilateral meeting was not possible between the two countries in the current situation, but India too made it clear then in response that no meeting was asked for or planned. However, it was speculated that an impromptu “pull-aside” could be possible at the informal  Brics meeting on the G-20 summit’s sidelines in Hamburg. As it turned out, the two leaders did finally meet separately even if it was just a “conversation” while standing. But the circumstances of how it happened remain unclear.

“At the Brics leaders’ informal gathering @ Hamburg hosted by China, PM @narendramodi and President Xi had a conversation on a range of issues,” MEA spokesman Gopal Baglay tweeted.

The MEA also issued a statement on the formal speeches of the two leaders at the Brics deliberations, saying: “The Prime Minister appreciated the momentum in Brics under the chairmanship of President Xi and extended full cooperation and best wishes for the Brics Xiamen summit. Concluding the meeting immediately after the PM’s remarks, President Xi appreciated India’s strong resolve against terrorism and the momentum in Brics introduced under India’s chairmanship and through the outcomes of the Goa Summit in 2016. He also appreciated India’s success in economic and social development and wished India even bigger success.”

The statement added: “The leaders of the five Brics (Brazil, Russia, India, China, South Africa) countries held an informal meeting on the sidelines of the G-20 summit in Hamburg, Germany. This was in run-up to the forthcoming 9th Brics summit in September in Xiamen, China. President Xi of China said he looked forward to welcoming the Brics leaders. In their interventions, the leaders discussed preparations and priorities for the forthcoming Xiamen Brics summit.”

“Prime Minister (Modi) mentioned that Brics has been a strong voice and needs to show leadership on terrorism and global economy. He stressed that G-20 should collectively oppose terrorism financing, franchises, safe havens, support and sponsors. Referring to reforms in India, including the recent introduction of GST, the PM stated it was necessary to work together for sustained global economic recovery. He advocated collective voice against the practices of protectionism, specially in the spheres of trade and movement of knowledge and professionals. He reiterated India’s commitment to implementing Paris Agreement in letter and spirit and described its implementation globally as essential to fighting climate change. He called for expeditious action to establish a Brics ratings agency and said cooperation on development of Africa should be a priority. He also called for greater people-to-people exchanges,” the MEA statement added.