One thing that one can assume is that the two were speaking German, a language that Putin speaks fluently. 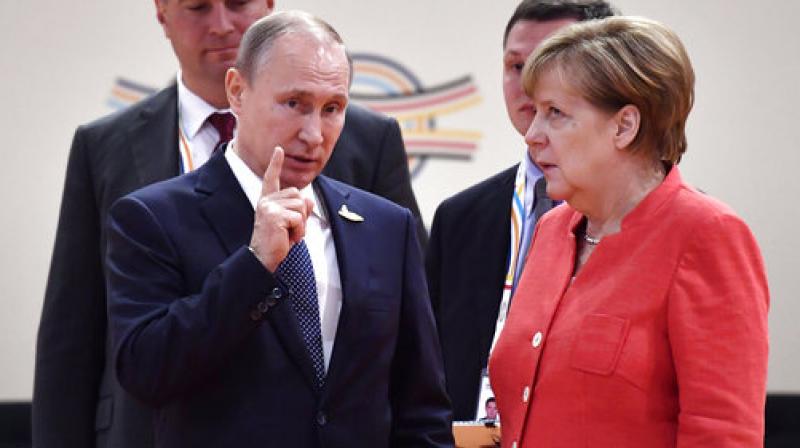 German Chancellor Angela Merkel talks with Russia's President Vladimir Putin at the start of the first working session of the G20 meeting in Hamburg (Photo: AP)

Hamburg: Germany Chancellor Angel Merkel is making headlines again. After spurring the handshake gate with Trump, Merkel’s eye-roll during a candid conversation with Russian President Vladmir Putin at annual G20 summit on Friday in Hamburg is going viral across the globe.

According to a report in Washington Post, Putin in a video was seen to be explaining something to Merkel to which she rolls her yes; probably exasperated, indirectly portraying disinterest.

As the world was gearing up to the see the first face off between US President Donald Trump-Putin, Merkel’s reaction caught netizens off guard. Nevertheless, it did not take too long for the incident to generate memes and jokes.

One thing that one can assume is that the two were speaking German, a language that Putin, who lived in East Germany from 1985 to 1990, speaks fluently, the report said.

However, this wasn’t the first time that two leaders were captured in awkward moment on camera. A 2014 New Yorker profile on Merkel mentioned that Putin had brought his dog into a 2007 meeting with Merkel, who is afraid of dogs (She was bitten once in 1995).

Merkel had been to latter’s residence in Sochi for a discussion on energy supplies when the Russian President summoned his black Lab, Koni, into the room where he and Merkel were seated.

The report mentioned that Merkel was seen to be frozen and frightened as the dog approached and sniffed her. The report also said that while Putin could not have missed Merkel’s expression, he reportedly sat with his legs spread wide allegedly enjoying the moment.