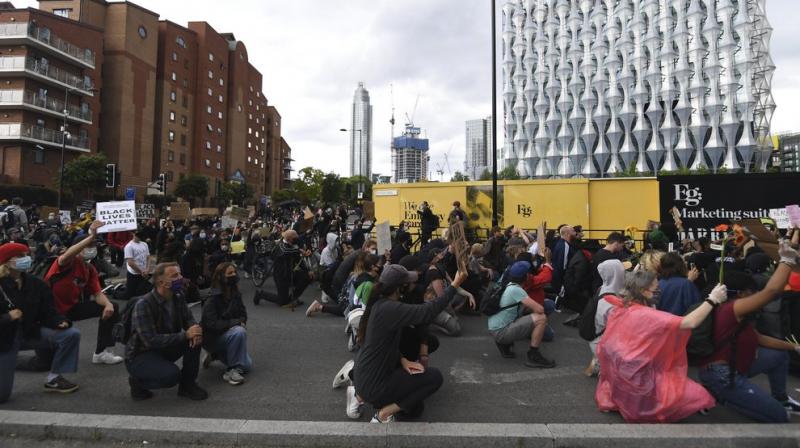 Protesters kneel as they gather in front of the US embassy during the Black Lives Matter protest rally in London. (AP)

Thousands of people attended protests on Saturday to voice their anger at police brutality after the killing of George Floyd in Minneapolis, ignoring government advice to avoid large gatherings due to the risk from coronavirus.

Asked during an interview on Sky News whether the number attending protests made an increase in COVID-19 cases more likely, Hancock said: “It is undoubtedly a risk.”

“I support very strongly the argument that is being made by those who are protesting ... but the virus itself doesn’t discriminate and gathering in large groups is temporarily against the rules precisely because it increases the risk of the spread of this virus.”

Under current government guidelines, gatherings of more than six people outside are not allowed.

John Edmunds, a member of the government’s Scientific Advisory Group for Emergencies (SAGE), said that while the risk of spreading the virus is lower outside, the current estimate is that around one in 1,000 people in the country are infectious.

“If you have a crowd of a few thousand people then you would expect some of those people to be infectious ... so it is a risk to have thousands of people congregating together,” he told BBC TV.

With more protests planned for Sunday, London police chief Cressida Dick urged protesters to “find another way to make your views heard which does not involve coming out on the streets of London” due to the coronavirus risk.