World   Europe  08 Jun 2017  Russian President Putin says he does not have ‘bad days’ like women do
World, Europe 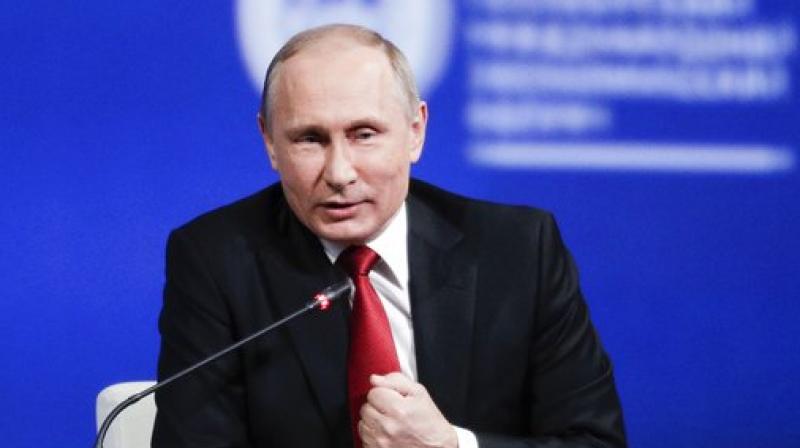 'The Putin Interviews', a documentary comprised of conversations with the Russian president that took place between July 2015 and February 2017, show Putin musing on life and philosophy. (Photo: AP)

London: Russian President Vladimir Putin does not have bad days because he is "not a woman", and would rather not shower next to a gay man because he wouldn't want to "provoke him".

The Russian President's comments came in series of interviews with American film director Oliver Stone on topics ranging from geopolitics to gay rights and Edward Snowden.

"The Putin Interviews", a documentary comprised of conversations with the Russian president that took place between July 2015 and February 2017, show Putin musing on life and philosophy.

"Do you ever have a bad day?" Putin was asked during a tour of the Throne Room, and he said, "I'm not a woman so I don't have bad days." He then doubles down on the misogyny, explaining that, "There are certain natural cycles which men probably have as well, just less manifested. We are all human beings. It's normal. But you should never lose control," the Guardian quotes Putin, as saying.

On the question whether gays can serve in the military in Russia, Putin said, "If you're taking a shower in a submarine with a man and you know he's gay, do they have a problem with that?"

Putin even denied that there was any persecution of gay people in Russia, despite a law being passed against the "propaganda of homosexuality among minors" and recent reports of a "gay purge" in the Russian republic of Chechnya. When asked whether he would be comfortable showering next to a gay man, he said no.

"I prefer not to go to the shower with him. Why provoke him? But you know, I'm a judo master," said Putin laughing.

In the interview with Stone, Putin reveals that he once suggested to former US president Bill Clinton that Russia may consider joining a Washington-led military alliance.

Commenting on US National Security Agency whistleblower Edward Snowden, the Russian President said, "Snowden is not a traitor. He did not betray the interests of his country. Nor did he transfer any information to any other country which would have been pernicious to his own country or to his own people. The only thing Snowden does, he does publicly."

Putin also appeared to change the story of how Snowden ended up in Moscow.

"Our first contact with Snowden was in China. We were told back then that this was a person who wanted to fight against violations of human rights," Putin said.

At the time, however, Putin and other Russian officials gave the impression that the first Russia knew of Snowden was when he arrived in Moscow with the intention to transit to Latin America.

"Snowden arrived in Moscow, which was completely unexpected for us. He came as a transit passenger, so he didn't need a visa or other documents," Putin said then.

When asked if he was worried about assassination attempts, Putin said "They say those who are destined to be hanged are not going to drown."

Putin, an ex- KGB Foreign Intelligence Officer for 16 years, said "I remember one of our last meetings with President Clinton, when Clinton was still in office. He visited Moscow and during a discussion I said, 'So, what if [we] consider an option of Russia maybe joining NATO."

While Clinton replied that he "didn't mind," the rest of the American delegation became visibly nervous, Putin recalled with a smile.

Putin called NATO "an instrument of America's foreign policy," saying that the US-led alliance "has no allies, but only vassals."

According to the Russian leader, some member states find it hard to resist Washington's pressure, and thus, "anything can be easily placed" on their territories, including both anti-missile and offensive systems.

"And what are we supposed to do? Due to that, we have to take counter measures," Putin told his American interviewer.

Promoted as "the most detailed portrait of Putin ever granted to a Western interviewer," it will feature interviews between the director and the Russian leader that were made during several encounters over two years.