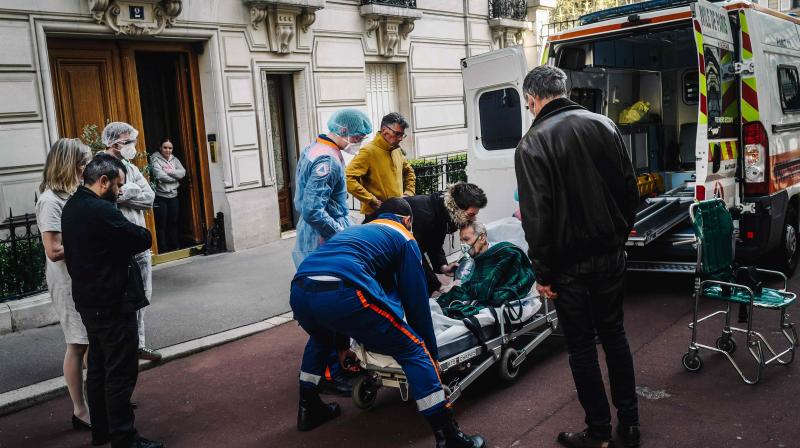 A grandchild gives a kiss to his grand-father, suspected of being infected with the novel coronavirus, as he is evacuated to a hospital by the Protection Civile Paris Seine first aid workers, from his home in Paris. (AFP)

Paris: Parisians must show forms to use rush-hour public transport and still avoid parks, though they will be able to shop at Champs-Elysee boutiques again, under measures to start lifting France’s coronavirus lockdown from Monday.

Though France is one of the worst-affected nations with 25,987 deaths, prime minister Edouard Philippe told a news conference that enough progress had been made in curbing COVID-19 and supporting hospitals to begin easing restrictions.

Some regions including the Paris area would, however, remain “red zones” with a more cautious end to the nearly two-month national shutdown.

“The country is cut in two, with the virus circulating more quickly in some regions, notably in the Paris region,” Philippe said. “In the Paris region, the infection rate is falling slowly, but it remains very high, higher than we expected. That is why in these territories we will need to be extra vigilant.”

Administrative regions around Calais, Strasbourg and Dijon will also remain “red zones”, where some restrictions will stay - such as keeping parks, gardens and secondary schools shut.

Beaches, water sports centres and lakes will remain closed for now but regional prefectures can allow their opening on request by the local mayor, Interior Minister Christophe Castaner said.

In Paris, commuters will need permissions from their employers to use the metro or buses at peak hours.

However, more than half of shops on the famed Champs-Elysees avenue, linking the Arc de Triomphe to the Paris Obelisk, can reopen, the avenue’s business committee said.

In other parts of France, cafes and restaurants may open from early June if the infection rate remains low.

Next week, about 1 million children and 130,000 teachers will return to school, Education Minister Jean-Michel Blanquer said.

The elderly and vulnerable were advised to continue observing the same distancing as during the lockdown in coming months, though the prime minister said that would not be compulsory and would rely on common sense.

“The distinction between green and red might tend to widen from June,” Philippe said. “Whether in a red or green area, we can’t get smart with the virus.”
Travel Restrictions

People will no longer need to carry a form to leave home, but papers will be needed for trips exceeding a radius of 100 km (62 miles), which will be only allowed for professional reasons, funerals or caring for the sick.

Castaner said controls would be enforced at train stations and major roads with fines of 135 euros ($146) for rulebreakers.

Travel restrictions with countries from Europe’s Schengen area will remain in place until at least June 15, while restrictions for travellers from outside Europe would be lifted “when the health situation allows it.”

Quarantine and isolation will be possible for all travellers into France once a new law is passed. However, these would not apply to EU countries and Britain - for now.

“At this stage, considering the way the epidemic has evolved in Europe and how aligned public health measures are between European countries, these measures will not apply within the European area,” Castaner said.

Some additional border crossings with other EU countries will be allowed, notably for the care or schooling of children, as well as for residents from the European area with a compelling economic reason, notably seasonal agricultural workers.