The G20 Summit began on Friday in the port city as world leaders assembled to discuss fight against terrorism. 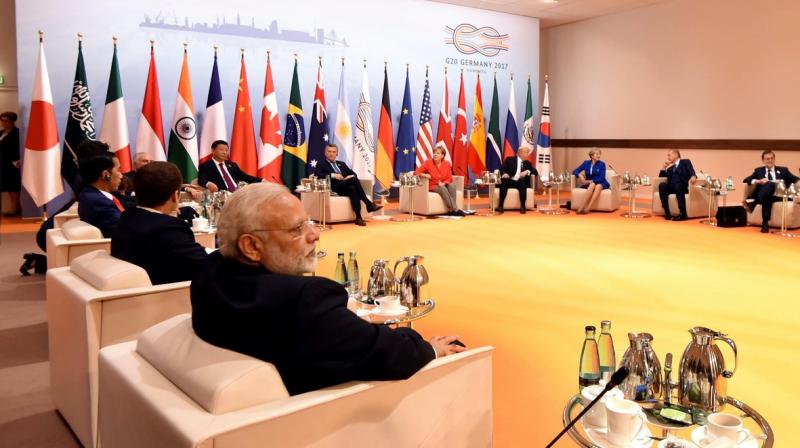 Welcoming plan of action in G20 on Counter Terrorism PM presented a 11-point action agenda for it.

PM welcomed plan of action in #G20 on Counter Terrorism and presented 11 point action agenda for it pic.twitter.com/Ig6maKcX1y

The G20 Summit began on Friday in the port city as world leaders assembled to discuss fight against terrorism and ways to improve open trade while Prime Minister Narendra Modi met his counterparts from the BRICS bloc.

Prime Minister Narendra Modi urged leaders from the BRICS nations to show leadership in fighting terrorism and boosting global economy even as he asked the G20 nations to collectively crackdown on terror financing, safe havens, "support and sponsors" of terrorism.

At the informal meeting of the BRICS leaders on the sidelines of the G20 Summit in Hamburg, Modi emphasised that it was necessary to work together for sustained global economic recovery.

He also referred to the reforms carried out by his government, including implementation of the Goods and Services Tax (GST).

"BRICS has been a strong voice and needs to show leadership on terrorism and global economy," Modi said.

He emphasised that the G20 should collectively oppose terrorism financing, franchises, safe havens, support and sponsors.

Besides, Modi advocated a collective voice against the practice of protectionism, especially in the spheres of trade and movement of knowledge and professionals.

Earlier, amid Sikkim standoff, Prime Minister Narendra Modi and Chinese President Xi Jinping greeted each other and exchanged words of praise at the informal meet of the BRICS nations.

Modi on the other, promised full cooperation and said, "There has been positive momentum in BRICS under chairmanship of President Xi Jinping, best wishes to him for upcoming BRICS Summit".

China and India have been engaged in a standoff in the Dokalam area near the Bhutan tri-junction for past 19 days after a Chinese Army's construction party attempted to build a road.

Earlier, China had 'cancelled' a sideline bilateral meet between Xi and Modi  saying that 'the atmosphere was not right', referring to tension stemming from the stand-off.

The G20 members, which include India and China, account for 80 per cent of the global economic output.