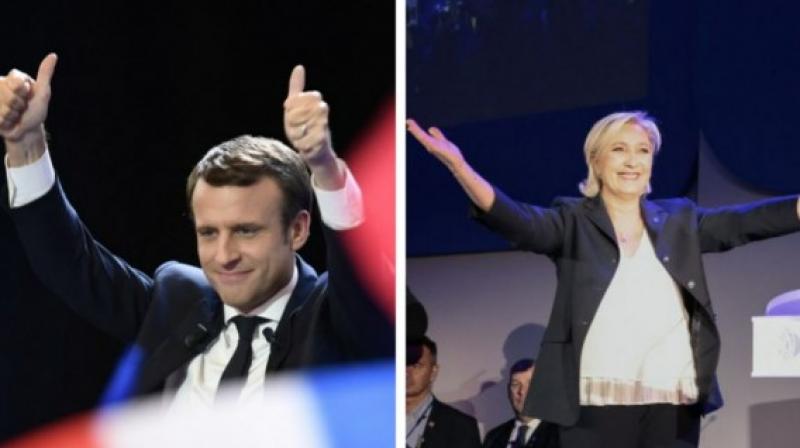 Either candidate would lead France into uncharted territory, since neither comes from the mainstream parties that dominate parliament and have run the country for decades. (Photo: AFP)

Paris: Feminist activists have hung a big banner from a church to protest French presidential candidate Marine Le Pen in the depressed northern town where she is casting her ballot.

The activists were quickly detained after the protest Sunday in Henin-Beaumont, the latest among many actions in recent days against Le Pen or against both candidates.
Polls suggest centrist Emmanuel Macron is favoured to beat Le Pen in Sunday's runoff election.

Parisian voter Yves Robert staged his own kind of protest, casting a blank ballot. Many voters like him are both worried about the racist past of Le Pen's National Front party and worried about the 39-year-old Macron's inexperience or his pro-business policies.

Retiree Gabrielle Lebbe says she voted because she's "worried for my grandchildren, I'm worried for the world."

With Macron the pollsters' favourite, voting stations opened across mainland France at 8 am (0600 GMT) under the watch of 50,000 security forces guarding against extremist attacks. Polling agency projections and initial official results will be available when the final stations close at 8 pm (1800 GMT).

Either candidate would lead France into uncharted territory, since neither comes from the mainstream parties that dominate parliament and have run the country for decades.