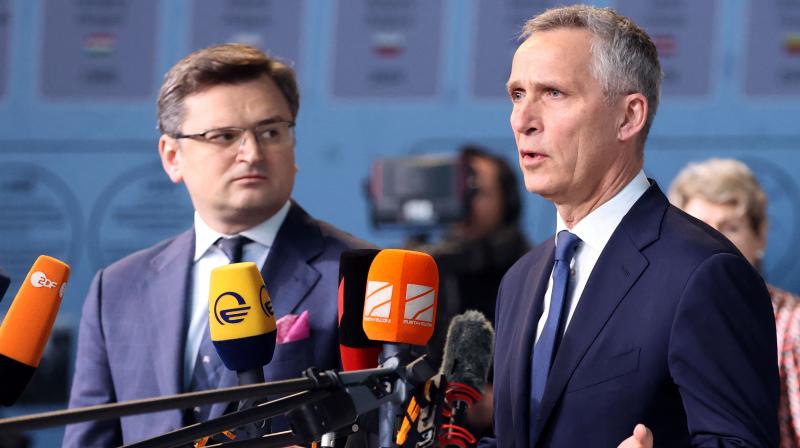 Ukraine's Foreign Minister Dmytro Kuleba (L) and NATO Secretary General Jens Stoltenberg speak to the press as they arrive for a meeting of NATO foreign ministers at NATO headquarters, in Brussels, on April 7, 2022. (François WALSCHAERTS / AFP)

Brussels: NATO Secretary-General Jens Stoltenberg on Thursday called on members of the organisation to provide more weapons for Ukraine and not just defensive anti-tank and anti-craft arms.

As NATO defence ministers gathered in Brussels, Stoltenberg said, I have urged allies to provide further support of many different types of systems, both light weapons but also heavier weapons.

Stoltenberg said NATO countries, but not NATO as an organisation, are supplying many kinds of arms and other support to Ukraine but that the 30 allies can do more.

He said, Ukraine is fighting a defensive war, so this distinction between offensive and defensive weapons doesn't actually have any real meaning.

Stoltenberg insisted that it is also important for NATO not to be dragged into a wider war with Russia.

NATO is not sending troops to be on the ground. We also have a responsibility to prevent this conflict from escalating beyond Ukraine, and become even more deadly, even more dangerous and destructive, he said.