Plane breaks into three after skidding off Istanbul runway 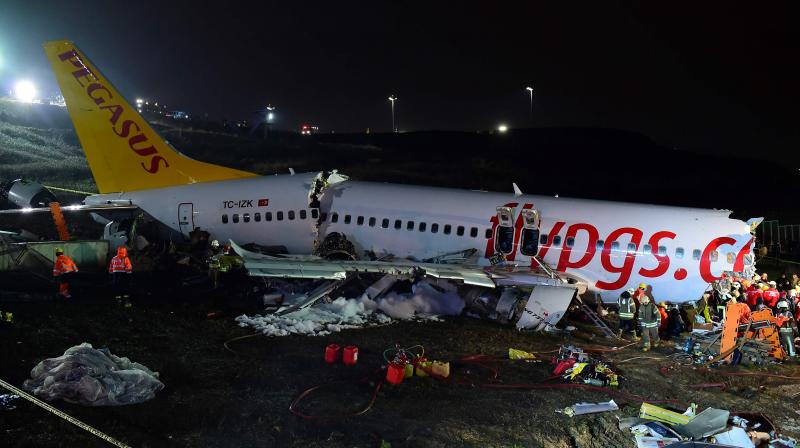 Rescuers work to extract passengers from the crash of a Pegasus Airlines Boeing 737 airplane after it skidded off the runway upon landing at Sabiha Gokcen airport in Istanbul on February 5, 2020. The plane carrying 171 passengers from the Aegean port city of Izmir split into three after landing in rough weather. Officials said no-one lost their lives in the accident, but dozens of people were injured. (AFP)

Istanbul: A plane carrying 177 people skidded off the runway at an Istanbul airport, caught fire and split into three after landing in rough weather on Wednesday. Officials said that no-one lost their lives in the spectacular accident, but 120 people were injured.

Live images broadcast on Turkish television showed several people climbing through a large crack in the severed aircraft and escaping onto one of the wings at the rear.

"At the moment, 120 people who were injured have been hospitalised," said governor Ali Yerlikaya, adding that most of them were "doing well, aside from one or two people."

"Some passengers evacuated the plane by themselves," transport minister Mehmet Cahit Turhan said on CNN-Turk television.

The plane was carrying 171 passengers and six crew members, the governor said, while Turkish media reports said there were 12 children on board.

Governor Yerlikaya said the plane "slid some 60 metres" after skidding off the runway, and then "fell about 30-40 metres" down a bank.

NTV showed images of the badly damaged plane and flames inside, which were later put out by firefighters.

Some sprayed water jets onto the severed body of the aircraft, while others could be seen climbing up onto the plane to comb through the cabin.

According to NTV, Turhan said the plane broke after a "strong landing" at Sabiha Gokcen, one of two main international airports in Istanbul.

The front of the plane including the cockpit was sliced off from bulk of the fuselage, and another huge fissure separated the rear of the aircraft including the tail.