Dhesi’s remarks were met with applause in the House as he made the inspiring yet fiery speech. 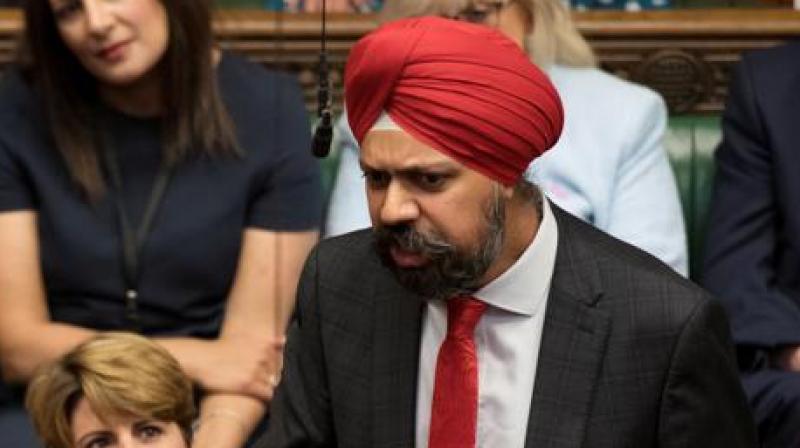 Dhesi ordered Johnson to launch an inquiry into alleged Islamophobia within his own Conservative Party. (Photo: Twitter)

London: A British Sikh parliamentarian has become the talk of the town after he made a passionate speech attacking Prime Minister Boris Johnson over his “derogatory” and “racist” remarks on Muslim women in the past.

Delivering his remarks at the House of Commons on Wednesday, Tanmanjeet Singh Dhesi, a Labour MP from Slough, slammed Johnson for equating burqa-clad Muslim women with “bank robbers” and “letterboxes” in a British newspaper column in 2018.

“For those of us, who from a young age have had to endure and face up to being called names such as towel head or Taliban or coming from bongo bongo land, we can appreciate the hurt and pain felt by already vulnerable Muslim women when they are described as looking like bank robbers and letterboxes,” the Indian-origin lawmaker remarked.

Dhesi ordered Johnson to launch an inquiry into alleged Islamophobia within his own Conservative Party.

If you have ever experienced racism or discrimination, you can appreciate full well the hurt and pain felt by Muslim women, who were singled out by this divisive Prime Minister. It’s high time he apologised for his derogatory and racist remarks! 1/2 pic.twitter.com/t6G56coA3U

“Rather than hide behind the sham and whitewash investigations, when will the Prime Minister finally apologise for his derogatory and racist remarks?...Racist remarks which have led to a spike in hate crime. Given the increasing prevalence of such incidents within his party, when will the Prime Minister finally order an inquiry into Islamophobia within the Conservative Party?” he said.

Dhesi’s remarks were met with applause in the House as he made the inspiring yet fiery speech.

In response, Johnson did not apologise but said that he was proud to have “the most diverse Cabinet in the history of this country” and the Conservatives “truly reflect modern Britain”, CNN reported.