Normally, thousands of Romans, tourists and pilgrims would have flocked to an outdoor mass. 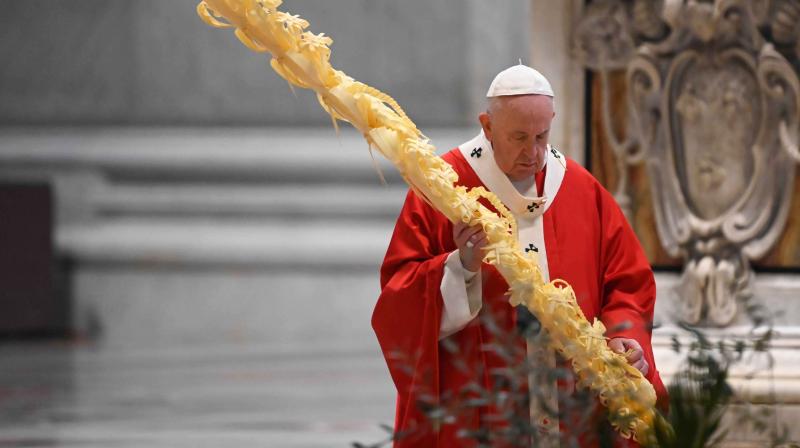 Pope Francis gathers his thoughts while holding a palm branch as he celebrates Palm Sunday mass behind closed doors at St. Peter's Basilica on Sunday. (AFP)

Vatican City: Pope Francis celebrated Palm Sunday Mass without the public because of the coronavirus pandemic, which he said should focus people's attention on what's most important, despite heavy hearts using one's life to serve others.

Normally, tens of thousands of Romans, tourists and pilgrims, clutching olive tree branches or palm fronds would have flocked to an outdoor Mass led by the pontiff. Instead, Francis celebrated Mass inside St. Peter's Basilica, which seemed even more cavernous than usual because it was so empty.

Besides his aides, a few invited prelates, nuns and laypeople were present, sitting solo in the first pews and staggered far apart to reduce the risks of contagion. A male choir, also practicising social distancing, sang hymns, accompanied by an organist.

Wearing red robes to symbolize the blood shed by Jesus in the hours of his crucifix, Francis blessed braided palms. Today, in the tragedy of a pandemic, in the face of the many false securities that have now crumbled, in the face of so many hopes betrayed, in the sense of abandonment that weighs upon our hearts, Jesus says to each one of us: 'Courage, open your heart to my love,' Francis said.

Francis urged people to hold fast to what really matters in our lives. The tragedy we are experiencing summons us to take seriously the things that are serious, and not to be caught up in those that matter less, to rediscover that life is of no use if not used to serve others," the pontiff said in his homily.
In a remark directed to young people, Francis said: Dear friends, look at the real heroes who come to light these days: they are not famous, rich and successful people.

Instead, he said, they are those who are giving themselves in order to serve others. Feel called yourselves to put your lives on the line. Earlier during the pandemic, Francis has praised medical staff, transport workers, supermarket clerks and others for their sacrifices to help lives.

May we reach out to those who are suffering and those most in need, the pope said. May we not be concerned with what we lack, but what good we can do for others.

Francis said that youth in Panama would have symbolically passed a cross on Sunday to others in Lisbon, Portugal, which will host the next Catholic world youth jamboree in 2022. Francis announced that the handover ceremony would take place instead on November 22.

Noting that sports events are cancelled, the pontiff said the best fruits of sport are evident these times: resistance, team spirit, brotherhood, giving the best of oneself.

At the end of Mass, Francis called on faithful to spiritually draw close to the sick, their families and those treating them and to offer prayers for the deceased.
May we reach out to those who are suffering and those most in need, the pope said. May we not be concerned with what we lack, but what good we can do for others.

Palm Sunday opens Holy Week leading up to Easter, which this year falls on April 12. Among the usual events is the Good Friday Way of the Cross procession. This year, instead of the customary candlelit procession at Rome's Colosseum, the Way of the Cross will be presided over by Francis in St. Peter's Square without the public, in keeping with Italian and Vatican anti-contagion bans on gatherings.

The Vatican has said there are seven cases of COVID-19 among the residents or employees of the tiny independent city state. The virus causes mild to moderate symptoms in most people, but for some, especially older adults and the infirm, it can cause pneumonia and lead to death.