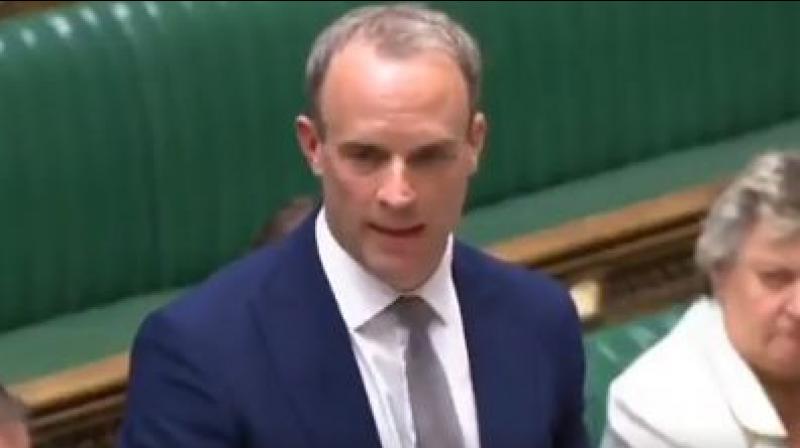 The Indian High Commission in London was gripped with fresh protests yesterday over the issue of Jammu and Kashmir that turned out to be violent after damages were caused to the building premises. (Photo: Twitter | @ShaileshVara)

London: Condemning the recent attack on the Indian High Commission building here that occurred twice within a month, British Foreign Secretary Dominic Raab has said that any violence against the British Indians or any other community residing in the United Kingdom is 'deplorable'.

Addressing the British Parliament on Tuesday (local time), Raab said, "Such violence should not be conducted anywhere else for that matter. Communities now need to reduce that tension but on a positive note, such as buildup confidence-building measures. This would not only allow reducing tension between communities in Kashmir and also between India and Pakistan."

The Indian High Commission in London was gripped with fresh protests yesterday over the issue of Jammu and Kashmir that turned out to be violent after damages were caused to the building premises.

The incident was raised in the British Parliament by Shailesh Vara, MP for North West Cambridgeshire, who said, "The violence and abuse targeted towards the British Indian community on this occasion is completely unacceptable as it would be to any community on the streets of UK."

Tuesday's incident marked the second time after India raised concerns over protests outside the Indian High Commission on August 15.

The Independence Day celebrations outside the Indian High Commission's building were marred by similar protests wherein a few Pakistan-backed protestors and anti-Khalistani elements had pelted stones and eggs at the Indians gathered outside embassy building.

Responding to the tweet by the Indian Mission in the UK, London Mayor Sadiq Khan also condemned the violent protests, saying it was "unacceptable".

Khan said, "I utterly condemn this unacceptable behaviour and have raised this incident with @metpoliceuk to take action."

The incidents have been occurring in the wake of the Indian government's decision of revoking the constitutional status of Jammu and Kashmir.