The National Council of Hindu Temples had invited Tapan Ghosh, for a keynote address where he allegedly voiced extremist views. 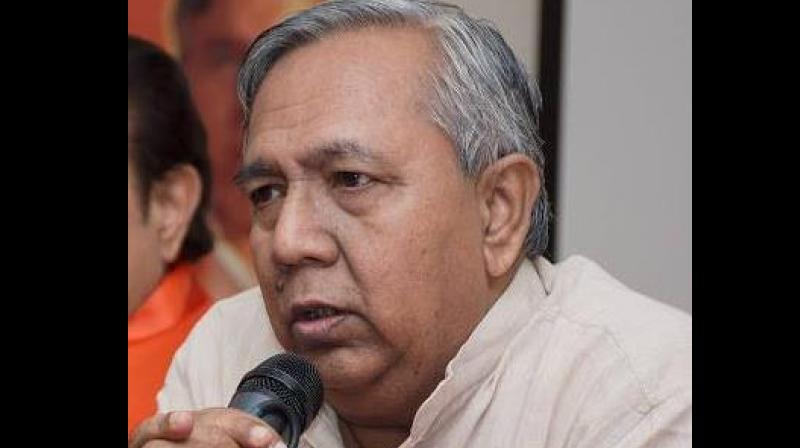 During his visit to the UK, Tapan Ghosh also attended a Diwali event organised by the Hindu Forum of Britain last month alongside Cabinet ministers including home secretary Amber Rudd, who has been forced to distance herself from his views. (Photo: Twitter/@hstapanghosh)

London: The UK’s charity watchdog has opened a compliance case against the National Council of Hindu Temples (UK) after the group was accused of inviting a controversial speaker to a seminar in the Parliament complex.

The umbrella group for Hindu temples and organisations in Britain had invited Tapan Ghosh, the founder of Hindu Samhati based in West Bengal, to give a keynote address at an event titled ‘Tolerating the intolerant: The abuse of Hindu human rights in Europe and India’ last month, during which he is accused of voicing extremist views.

The UK’s Charity Commission, in charge of regulating all charitable institutions registered in the country, confirmed on Friday that it had opened a case which will involve questioning the trustees to decide if any further action was required.

“The Commission has opened a case into the National Council of Hindu Temples (UK) to assess concerns raised regarding a speaker at an event linked to the charity,” the Charity Commission said in a statement.

Meanwhile, members of the Association of British Muslims, the Asian Mums Network, and the Women Against Radicalisation Network have co-signed an open letter to the Charity Commission demanding the National Council of Hindu Temples (UK) be stripped of its charity status.

“We believe the NCHTUK should be stripped of its charity status for inciting religious hatred...(Ghosh) runs a hardline Hindu militant group whose sole purpose is to demonise and ‘protect Hindus from Muslim aggression’,” the letter reads.

The event in the House of Commons complex in October was hosted by Conservative party MP Bob Blackman as chair of the All Party Parliamentary Group (APPG) for British Hindus.

Ghosh “made no abhorrent remarks at the meeting, and I am quite clear that I and the National Council of Hindu Temples do not agree with the views he previously stated,” he said.

The NHCTUK has stressed that the core subject of the event was the “sustained targeting and abuse of Hindu and Sikh girls- their selection on the basis of their religion and their subsequent physical and emotional abuse for the purposes of forced conversion to Islam”.

During his visit to the UK, Ghosh also attended a Diwali event organised by the Hindu Forum of Britain last month alongside Cabinet ministers including home secretary Amber Rudd, who has been forced to distance herself from his views.

“The home secretary fundamentally disagrees with Ghosh’s views on Islam. The home secretary accepted an invitation from the Hindu Forum of Britain to attend an event in Parliament... to celebrate Diwali. She did not speak to Ghosh and was not present when he spoke,” her spokesperson said.