Michael Fallon has been replaced with Gavin Williamson, the former Conservative chief whip. 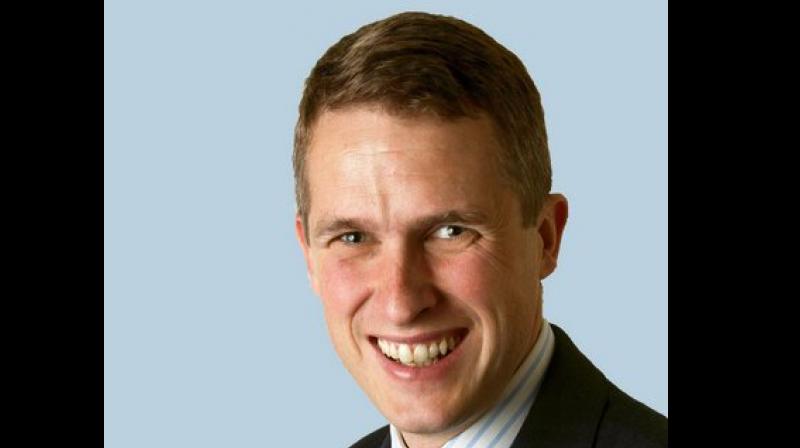 Fallon's resignation is an unwelcome challenge for May, who is struggling to keep her fractious government united as Britain heads for the European Union exit. She replaced Fallon on Thursday with Gavin Williamson, the former Conservative chief whip. (Photo: Twitter)

London: The resignation of Britain's defence secretary amid a growing sexual harassment scandal is a sign the UK's corridors of power are not always a comfortable place for women.

As allegations of impropriety and abuse spread to more politicians and officials, many women are expressing hope this will be a tipping point in transforming Britain's macho political culture. Some men, though, worry they are being unfairly tainted by allegations of sexism.

Michael Fallon, a dependable lieutenant to Prime Minister Theresa May, quit as defence secretary late Wednesday, saying his past behaviour "may have fallen below the high standards" expected. Fallon had apologized after a newspaper reported that he had repeatedly touched a journalist's knee at a function in 2002, and reports suggested more allegations about him might emerge.

Fallon's resignation is an unwelcome challenge for May, who is struggling to keep her fractious government united as Britain heads for the European Union exit. She replaced Fallon on Thursday with Gavin Williamson, the former Conservative chief whip.

It's also a challenge to the British political system.

Multiple sexual-harassment claims against British politicians have emerged since the scandal around movie mogul Harvey Weinstein emboldened people in many industries - including politics - to speak up about improper behaviour by powerful individuals who control their future job prospects.

In a new allegation, a 27-year-old woman told the Daily Telegraph newspaper that Labour Party lawmaker Kelvin Hopkins inappropriately touched her at a university event in 2014. Labour said it had suspended Hopkins after receiving allegations and was investigating.

Britain's Parliament is an intense and insular place, where politicians and parties employ large numbers of young and ambitious staff. The building, full of long corridors, dark crannies and cheap bars, is the perfect stage for liaisons, intrigue - and worse.

"Where you have lots of young individuals, be they men or women, with very little in terms of employment protection, it seems like the perfect environment for abuse," said Victoria Honeyman, a lecturer in politics at the University of Leeds.

She said the allegations so far were likely "the tip of the iceberg."

"I think there will be an awful lot of very, very worried individuals across the political spectrum," she said.

For decades, Parliament was famous for a rowdy, male-dominated culture of hard drinking, boozy debates and midnight votes.

British politics also has a long history of sex scandals: The "Profumo affair" involving a government minister, a model and a Soviet attache helped bring down the Conservative government in 1963. Prime Minister John Major's early-90s government was debilitated by regular reports of embarrassing affairs.

Parliament's raucous atmosphere was dealt a blow several years ago with a move to more "family friendly" hours, with sittings starting earlier in the morning and ending earlier in the evening. One of the building's many bars has been turned into a nursery for the children of legislators and staff.

The number of female lawmakers has risen, though they are still outnumbered by men. When Margaret Thatcher became Britain's first female prime minister in 1979, only 3 percent of lawmakers were women. The figure rose to 22 percent by 2010, and to 32 percent this year.

In addition to a woman as prime minister, Scotland has a female leader in First Minister Nicola Sturgeon, and women lead the Scottish Conservatives, the Welsh party Plaid Cymru and Sinn Fein in Northern Ireland.

Read: UK Labour activist says she was raped by party colleague, told not to report it

Yet many women in politics say there is much further to go.

Sophie Walker, leader of the Women's Equality Party, said the stories emerging from the worlds of entertainment, media and politics "demonstrate an epidemic of sexual harassment which is absolutely about power - a massive, endemic imbalance of power."

May has summoned party leaders to a meeting next week to discuss how to deal with harassment claims, amid worries there is more to come.

The number two in May's Cabinet, Damian Green, is being investigated by officials over an allegation he made inappropriate advances to a Conservative activist. Labour is investigating claims by a young activist that the party discouraged her from reporting that she was raped at a party conference.

A leaked document dubbed the "spreadsheet of shame" compiled by Conservative Party aides lists allegations about 36 lawmakers. The information ranges from gossipy claims of consensual affairs to allegations such as "handsy with women at parties" and "paid a woman to be quiet."

Some of those named on the list have come forward to deny wrongdoing and suggest they are victims of a witch hunt.

Conservative lawmaker Dominic Raab said the document contained a false allegation that he had taken out an injunction against a woman, and accused those publishing untrue claims of "harassment and intimidation."

As claim and counterclaim flew, Scottish Conservative leader Ruth Davidson called for major action, saying politicians are going to "need some pretty big shovels for the Augean stable" that must be cleaned.

"The house clearing that is about to happen needs to happen, and we can never go back to where we were before," she said.