About 350,000 Hong Kongers currently hold British National Overseas passports and another 2.5 million would be eligible to apply for them 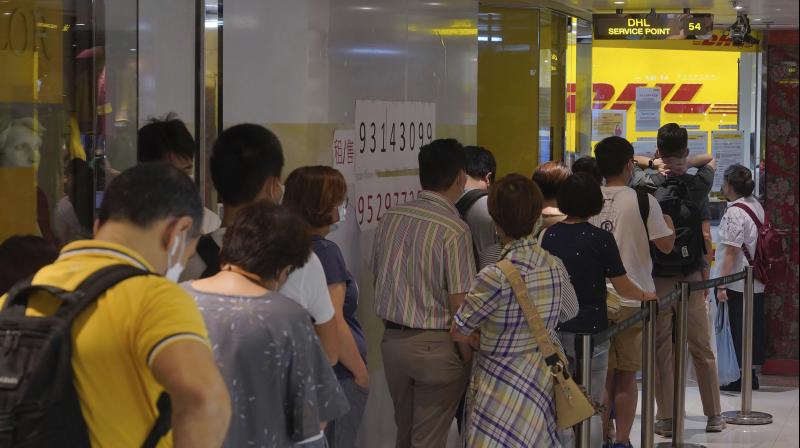 People lined up at DHL courier outlets across the city, many to send documents to the U.K. to apply for or renew what is known as a British National (Overseas) passport. (AP)

The United Kingdom is prepared to change its immigration rules if China imposes a national security law on Hong Kong, British Prime Minister Boris Johnson said on Wednesday in an op-ed for the South China Morning Post.

“Since the handover in 1997, the key has been the precious concept of ‘one country, two systems’, enshrined in Hong Kong’s Basic Law and underpinned by the Joint Declaration signed by Britain and China”, Johnson wrote.

The British prime minister added that China’s decision to impose a national security law on Hong Kong will “curtail its freedoms and dramatically erode its autonomy”.

He described China’s step as being in conflict with the obligations under the Joint Declaration.

Under the change, holders of British National Overseas passports from Hong Kong would be allowed to enter the UK for a renewable period of 12 months and given further immigration rights, he added, “including the right to work, which could place them on a route to citizenship”.

About 350,000 of the territory’s people currently hold such passports and another 2.5 million would be eligible to apply for them, Johnson said.

China’s parliament last week approved a decision to create laws for Hong Kong to curb sedition, secession, terrorism and foreign interference. Mainland security and intelligence agents may be stationed in the city for the first time.

On Tuesday, Britain warned Beijing to step back from the brink over the national security law in Hong Kong, saying it risked destroying one of the jewels of Asia’s economy while ruining the reputation of China.