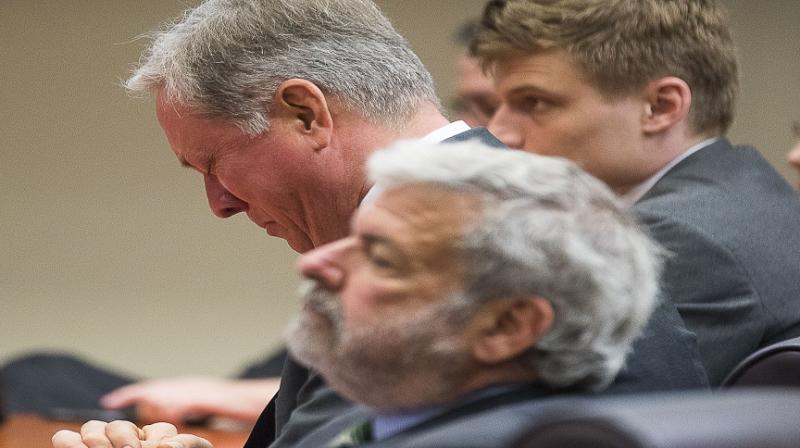 A former Georgia police officer convicted of aggravated assault and other crimes in the fatal shooting of an unarmed, naked man was sentenced Friday to 12 years in prison. (Photo: AP)

Decatur: A former Georgia police officer convicted of aggravated assault and other crimes in the fatal shooting of an unarmed, naked man was sentenced Friday to 12 years in prison.

Robert "Chip" Olsen was responding to a call of a naked man behaving erratically at an Atlanta-area apartment complex in March 2015 when he killed 26-year-old Anthony Hill, a black Air Force veteran who'd been diagnosed with bipolar disorder and PTSD.

"I see you," the judge told Hill's family, saying she watched them throughout the trial and admired their strength. She told Olsen she also watched him and, while many may have thought he was stoic throughout, she saw him shedding tears and replaying the shooting in his head.

While the sentence was lower than prosecutors wanted, DeKalb County District Attorney Sherry Boston said she's grateful Olsen will spend time behind bars and will be held accountable for his actions.

"A badge, a uniform, a gun are not a license to shoot and kill with impunity," she said.

In an email after the hearing, defense attorney Amanda Clark Palmer said "we cannot say it is an unfair sentence, and we appreciate (the judge's) thoughtfulness."

Clark Palmer added that Olsen is remorseful about Hill's death.

"As Ms. Olsen said today, she and Chip think about the Hills every day and Chip will think about Anthony Hill every day for the rest of his life," she wrote, referring to a statement Olsen's wife read in court.

Olsen himself did not address the court and was led from the courtroom by sheriff's deputies after the sentencing.

Hill's mother, Carolyn Giummo, told the judge she knows Olsen didn't wake up that day intending to kill her son, but he's the reason she had to bury her youngest child.

"Because he chose to use deadly force, that is the reason we're here," she said. "This is what this is all about, the consequences of that decision."

After the sentencing, Giummo said she didn't get the sentence she'd hoped for but that some prison time is better than none. She added that she would have liked to hear from Olsen: "I was hoping he was going to get on the stand to defend what he did, and he didn't."

Along with Giummo, Hill's sister Tamara Giummo and father Anthony Hill Sr., addressed the judge, talking about his peaceful nature, love for children and music, and the pain left by his death. They urged her to impose the maximum sentence, which would have been 30 years in prison after two of the counts were merged.

Two friends and a former DeKalb police colleague attested to Olsen's good character, calling him loyal, kind and hardworking. His wife read a statement, her voice cracking with emotion.

"I believe that most people in this world do try to do what they feel is the right thing, some are just better at it than others," Kathy Olsen said. "My husband, I truly believe, is one of these people."

A jury in Dallas found former officer Amber Guyger guilty of murder in the shooting of Botham Jean. Guyger testified that she mistook Jean's apartment for her own and thought he was a burglar. She was convicted October 1 and was sentenced to 10 years in prison.

A few days later, a Georgia jury found a white former police officer who fatally shot a fleeing, unarmed black man not guilty of voluntary or involuntary manslaughter. Jurors did find Zechariah Presley guilty of violating his oath of office in the 2018 shooting of Tony Green. Presley was sentenced to a year in prison.

In the Olsen case, the apartment complex manager where Hill lived testified that she saw him wearing only shorts and behaving strangely on March 9, 2015. After returning to his apartment briefly, Hill reemerged without clothes. The property manager called 911 three times.

Dispatch told Olsen there was a naked man who was "possibly demented." Hill was squatting in a roadway when Olsen arrived but jumped up and ran toward the patrol car, witnesses said.

Prosecutors told jurors Olsen unreasonably and unnecessarily used deadly force to deal with the unarmed, naked man who was suffering a mental health crisis. Defense attorneys argued Olsen had limited information, was scared to death, had only seconds to make a tough decision and acted in self-defense.