What we know about Catalan independence vote

A total of 465 people were treated at hospitals and health centres, while Spain's interior ministry said 12 police officers were injured. 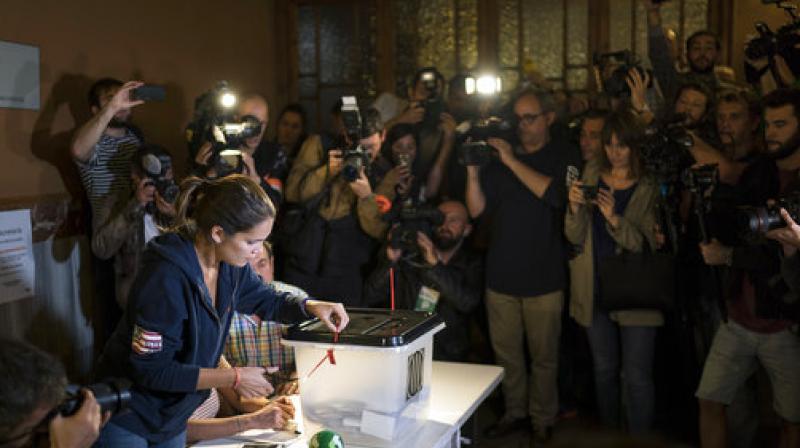 The most recent poll commissioned by the regional government in July showed 41.1 percent in favour of seceding, and 49.4 percent against. (Photo: AP)

Catalan: Spanish riot police stormed voting stations Sunday as they moved to stop Catalonia's independence referendum after it was banned by the central government in Madrid.

At least 92 people were confirmed injured as hundreds tried to prevent the polling stations from being closed, Catalan officials said.

A total of 465 people were treated at hospitals and health centres, while Spain's interior ministry said 12 police officers were injured.

The regional government, which had planned to open about 2,300 polling stations, said 319 had been sealed off by security forces, while the Spanish government said 92 stations had been closed across the region as of 1500 GMT.

The vote was called by regional leader Carles Puigdemont, who was emboldened after separatists won a narrow majority in the regional parliament in 2015.

- The referendum -
Catalans were being asked: "Do you want Catalonia to become an independent state in the form of a republic?"

The Spanish government is refusing to recognise its legality, deeming it unconstitutional.

The Catalan authorities have vowed to declare independence within 48 hours in case of a "Yes" victory, though it is far from clear they will do so.

Roughly 5.3 million people were eligible to vote, and most of the region's 948 municipalities agreed to provide voting facilities.

But the Spanish government says police closed most of the 2,315 polling stations on the eve of the vote.

- The response -
Deputy Prime Minister Soraya Saenz de Santamaria described the referendum as a "farce" and demanded it be called off.

It has been ruled unconstitutional by both the Madrid government and the courts, with judicial officials ordering police to seize millions of ballot papers, detain organisers and shut down websites promoting the vote.

Riot police in helmets and armed with batons fired rubber bullets and stormed polling stations, many of which had been occupied by activists trying to keep them open.

Madrid sent an additional 10,000 agents to the region, including the majority of its riot police, according to El Pais newspaper.

Barcelona played their match against Las Palmas behind closed doors in what club president said was a protest against he violent clashes.

Police also raided the Catalan government's communications hub in Barcelona on Saturday, cutting its connections with polling stations and access to software that could have allowed an online vote.

Several left-wing Spanish politicians demanded Prime Minister Mariano Rajoy resign after over the use of force by police.

- The region -
Catalonia, a region of 7.5 million people bordered by the Mediterranean and the Pyrenees, is about the size of Belgium, accounting for 6.3 percent of Spain's territory and 16 percent of its population.

Its thriving economy, buoyed by industry, research and tourism, generates one-fifth of the economic output of the eurozone's fourth-biggest economy.

But it is also one of Spain's most indebted regions with a debt mountain of 75.4 billion euros ($90 billion) at the end of March, equivalent to 35.2 percent of its GDP.

- Why independence? -
With its own regional parliament, Catalonia already enjoys significant powers over matters such as education, healthcare and welfare.

Spain's economic woes, coupled with resentment that the region pays billions of euros more in taxes than it receives from Madrid, have pushed secession from the fringes of Catalan politics to centre stage.

The regional government argues that an independent Catalonia would be richer and better able to protect its language and culture.

It had already defied Madrid in November 2014 by holding a symbolic independence vote where more than 80 percent -- 1.8 million people -- of voters chose independence, though turnout was just 37 percent.

The most recent poll commissioned by the regional government in July showed 41.1 percent in favour of seceding, and 49.4 percent against.