The concert will be broadcast on BBC and is expected to raise more than 2 million pounds for the Red Cross fund. 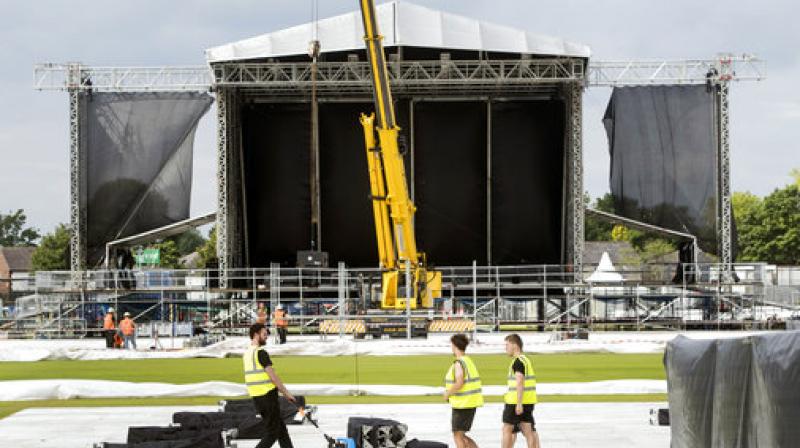 Preparations take place ahead of Ariana Grande's One Love Manchester concert, at the Emirates Old Trafford cricket ground, in Manchester, England, Thursday. Grande announced Tuesday that she and other top stars including Justin Bieber, Coldplay and Miley Cyrus will return to the city to perform at a benefit concert on Sunday. (Photo: AP)

London: Tickets of a tribute concert by US pop star Ariana Grande for the Manchester bombing victims were sold out within 20 minutes of their release on Thursday.

The "One Love Manchester" concert is being organised by Grande, who was performing at the iconic Manchester Arena when a 22-year-old Libyan-origin  bomber, Salman Abedi, blew himself up, killing 22 people and injuring over 100 others.

The concert will take place on Sunday at the Emirates Old Trafford cricket ground near Manchester Arena, with proceeds going to the Red Cross Manchester Emergency Fund.

Grande will be joined by a long line-up of high-profile acts, including Robbie Williams, Take That and Justin Bieber. Fans who were present at her concert on May 22 are eligible to register for free tickets, while the tickets on general sale were snapped up within minutes.

Ticketmaster, in-charge of the tickets for the show, said its website experienced "remarkable demand" when tickets went on sale this morning. The company said it was aware that some fans, who were at the original show, have not yet been able to claim their places for the Sunday's event, and extended the registration period until afternoon.

Ticketmaster said: "We understand that there are a number of fans who didn't receive an email this morning with regards to free tickets for 'One Love Manchester'.

We worked through the night and verified thousands of original bookings although there were some we could not verify. "We want to give all fans who were at the show regardless of where they bought their tickets, every opportunity to register for 'One Love Manchester'".

The concert will be broadcast on BBC and is expected to raise more than two million pounds for the Red Cross fund. The Black Eyed Peas, Coldplay, Usher and Pharrell are among some of the stars confirmed to perform.

Fans have been asked not to bring bags to avoid delays going through security. Meanwhile, Greater Manchester Police have released six persons arrested in connection with the bombing in the city last month without charge and continue to question 10 remaining suspects.

"As it stands, 16 people in total have been arrested in connection with the investigation, of which six people have since been released without charge. A total of 10 men remain in custody for questioning," a police statement said.

They have also released CCTV images of suicide bomber Abedi who was seen hours before the blast at Manchester Arena as part of their public appeal for information.