Megyn Kelly, who interacted with the Prime Minister and President Putin, set Twitter on fire for asking the former the question. 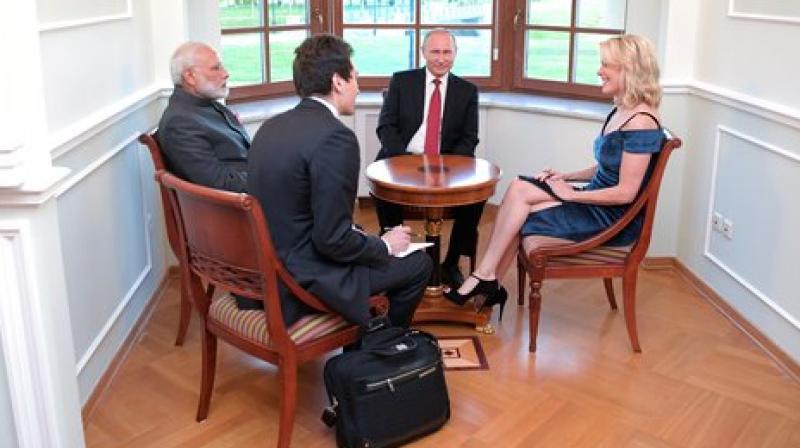 St Petersburg: It is a prerequisite for every journalist to do their basic preparation and background check before interviewing famous personalities, but National Broadcasting Company (NBC)'s Megyn Kelly clearly fell short on her homework and is now being bashed across Twitter for her incredible question to Prime Minister Narendra Modi.

Kelly, who interacted with the Prime Minister and Russian President Vladimir Putin at state dinner party at Konstantin Palace in St. Petersburg, immediately set Twitter on fire for asking the former the question.

This ludicrous situation came to light when Prime Minister Modi praised Kelly for her picture on Twitter where she is posing with an umbrella, to which the seemingly taken aback Kelly asked the Prime Minister "Are you on Twitter?"

.@NBCNews @megynkelly asks @narendramodi ,the 3rd Most Followed World Leader on @Twitter ,"Are you on #Twitter ?". She hasn't done homework! pic.twitter.com/6KTVj3yY2G

The Prime Minister laughed off her question.

Another person, questioned Kelly to look at her profile first before asking the question comparison.

Dear @megynkelly here is ur twitter profile vs @narendramodi sir profile,still u ask that r u on twitter. Wats d population f ur country btw pic.twitter.com/bFcanO6iLP

Another important angle emerging from the development is that Putin invited the Indian Prime Minister to join at the NBC event, which is being seen as a possible 'message' to the United States.

Nevertheless, Kelly may sure have come under the spotlight for her important tete-a-tete with two of the world's greatest leaders, but now this one lone blunder is sure to haunt her for a long time.