Russia said it is convinced that India's participation in multilateral export control regimes will contribute to their enhancement. 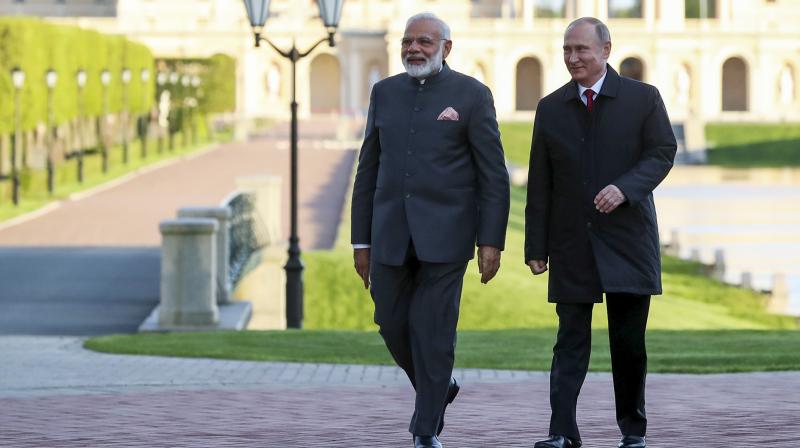 St Petersburg: Russia today reaffirmed its "strong support" to India's candidature for a permanent seat in the reformed UN Security Council and a membership in the Nuclear Supplier Group and other non-proliferation regimes.

In the annual bilateral summit between Prime Minister Narendra Modi and Russian President Vladimir Putin, the two sides resolved to enhance their cooperation at multilateral fora like the BRICS, WTO, G20 and Shanghai Cooperation Organisation as well as Russia-India-China cooperation.

"We believe that there is a need to reform the United Nations and in particular, the UN Security Council to make it more representative of contemporary realities and to respond more effectively to emerging challenges and threats.

"Russia reaffirms its strong support to India's candidature for a permanent seat in a reformed United Nations Security Council," said a vision document issued after the Modi-Putin talks.

Strongly backing New Delhi's bid to the 48-member elite NSG club, Russia said it is convinced that India's participation in multilateral export control regimes will contribute to their enhancement.

"In this context, Russia welcomes India's application for the membership in Nuclear's Suppliers Group and the Wassenaar Arrangement and reiterates its strong support for India's earliest admission to these control regimes," the declaration said.

Of the four major export control regimes - the NSG, MTCR, Australia Group and the Wassenaar Arrangement - India is a member of the Missile Technology Control Regime. It has applied for an NSG membership last year, but faces stiff opposition from China.

India has also recently aligned its export control list with the one similar to the Wassenaar Arrangement's list.

In the summit, the two sides, in an obvious reference to China's One Belt One Road (OBOR) project, said they oppose any recourse to "unilateralism or lack of respect to sovereignty" and ignoring the core concerns and legitimate interests of the countries.

The main reason behind India's opposition towards the policy is the China-Pakistan Economic Corridor (CPEC), which is a part of the OBOR. CPEC's route cuts through Pakistan- occupied Kashmir (PoK).

The two sides said they will work together to foster the democratisation and reform of global political, economic, financial and social institutions, for them to better accommodate the interest of all members of the international community.

"We will continue facilitating efforts to build an open, well-balanced and inclusive security architecture in the Asia-Pacific region based on shared principles and taking into account the legitimate interests of all states, including through the development of relevant dialogue in the framework of the East Asia Summit," the vision document said.

The two sides also resolved to further their cooperation on challenging issues like restoration of pace and stability in the Middle East and North Africa, settlement of the Syrian crisis, achievement of national reconciliation in Afghanistan.