While 37 per cent of the UK’s doctors are foreign-born, nearly one in 10 are from India, all currently on the frontline of Covid fight 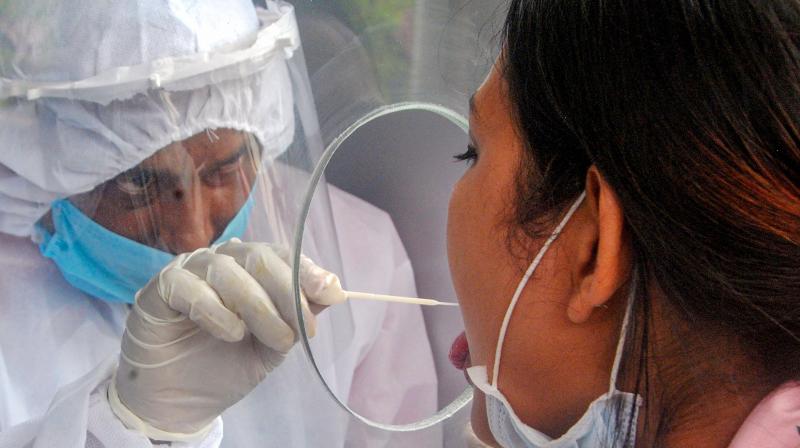 A medic wearing a protective suit collects a swab sample of a woman for COVID-19 testing. (PTI)

Indians make up one in 10 of all foreign-born doctors in the UK’s National Health Service (NHS) and therefore face a greater risk from the coronavirus pandemic, according to a new report published on Friday.

The Institute of Fiscal Studies (IFS) study, in its report analysing the ethnic variables in the impact of coronavirus, also found that Indians are among the ethnic groups less likely to be impacted by the economic consequences of the lockdown imposed to curb the spread of the deadly virus due to their employment in more secure sectors.

“Indian men are particularly exposed to the virus due to their prevalence in healthcare roles,” said the report titled ‘Are some ethnic groups more vulnerable to Covid-19 than others?’

“Indian men are 150 per cent more likely to work in health or social care roles than their white British counterparts. While the Indian ethnic group makes up 3 per cent of the working-age population of England and Wales, they account for 14 per cent of doctors,” it said.

The IFS analysis found that among the UK’s working age population, those working in health and social care may be at the greatest risk of infection, with Indians facing a high risk due to their sheer numbers.

While 37 per cent of the UK’s doctors are foreign-born, nearly one in 10 are from India – all currently on the frontline of the coronavirus fightback in hospitals and other care settings.

In reference to its analysis of the economic impact of the pandemic on different ethnic groups, the study found that Pakistani and Bangladeshi households were more vulnerable among the South Asian cohort due to a higher proportion of them in sectors which are undergoing shutdown due to the social distancing rules.

“Ethnic groups also vary substantially in their economic vulnerability under the restrictions currently in place… Indian ethnic groups face lower economic risks and are more comparable to white British in this regard,” according to the study.

“Bangladeshi and Pakistani groups, by contrast, appear to be particularly at risk due to the high percentage of either group working in shutdown sectors and/or in self-employment, combined with the prevalence of single-earner households which reduces the potential for income buffers within the household,” it added.

In its other findings, the IFS study concluded that coronavirus patients from black African backgrounds in England and Wales are dying at more than triple the rate of white Britons, followed by Pakistani men as the next highest category.

The study concludes: “In sum, there is clear evidence for disproportionality in COVID-19 mortalities thus far for a number of ethnic groups after accounting for their age profiles and places of residence.

“While it is difficult to say definitively with the data that are currently available, the clustering of some minority groups in key worker occupations – and in health and care key worker roles in particular – alongside greater susceptibility to relevant long-term conditions, are likely to be contributing factors to the observed inequalities.”

The analysis focuses on a limited set of risk factors in terms of both infection risk and economic vulnerability in the short term and concludes that more research is required for a better understanding of the disparity in the impact of the pandemic among different ethnicities.

The UK government launched an official review, led by Public Health England, earlier this month as it emerged that black, Asian and minority ethnic (BAME) are affected disproportionately by the deadly virus.