Johnson and his government have been criticised for not stepping up testing, and also for moving slowly on bringing in the lockdown 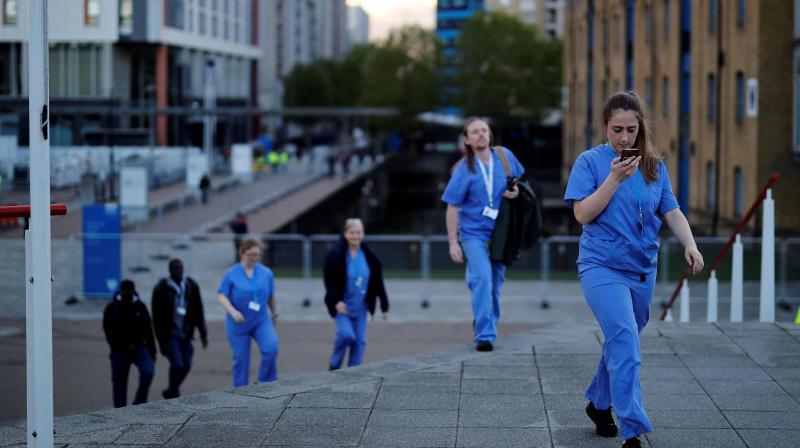 Medical staff from Britain's NHS (National Health Service) in scrubs walk outside the ExCeL London exhibition centre, which has been transformed into the "NHS Nightingale" field hospital in London. (AFP)

London: Britain has hit its target of carrying out 100,000 COVID-19 tests a day, health minister Matt Hancock said on Friday, stressing that the programme was crucial to helping ease a national lockdown.

Hancock also announced that the British death toll had risen by 739 to 27,510 deaths - just below that of Italy which was one of the first and worst-hit European states.

Hancock set the target of reaching 100,000 tests by the end of April after being criticised for moving too slowly on mass testing compared to other countries like Germany.

Since then, the government has increased the number of drive-through testing sites, begun sending out home tests and has rapidly expanded the number of people eligible to apply for a test.

“This unprecedented expansion in British testing capability is an incredible achievement,” he said. “Testing is crucial to suppress the virus ... It helps remove the worry. It helps keep people safe, and it will help us to unlock the lockdown.”

Prime minister Boris Johnson said on Thursday that Britain had passed through the coronavirus peak, and promised to set out next week how the country will start returning to normal life.

Nearly six weeks into the most stringent restrictions on daily life in Britain’s peacetime history, Hancock was asked whether people could plan family gatherings and holidays for late summer.

“It’s still too early to say and I’m really sorry to have to give that answer, but it is,” he replied.

A mass testing programme to gauge the spread of the virus through the population is seen as key to any easing of the social distancing measures that have all but shut down the economy and forced millions to stay at home.

The number of tests carried out has increased rapidly in recent days, and has risen from levels of around 10,000 per day in early April.

But political opponents immediately accused Hancock of manipulating the data.

Testing programme coordinator John Newton said that home testing and some other testing kits were being included in the number of tests completed at the point they were sent out, not when they were analysed. These accounted for around 40,000 of the latest total.

Johnson and his government have been criticised not only for not quickly stepping up testing, but also for moving slowly on bringing in the lockdown and for a lack of protective equipment for health workers.

Opposition Labour leader Keir Starmer renewed his criticism of the prime minister in an interview with the Evening Standard newspaper, saying Johnson had been “slow, slow at every turn”.

He called for testing to be ramped up to a quarter of a million tests every 24 hours and for 50,000 contact-tracers to be deployed to keep the nation safe.