In hidden mountain air base, Albania stores jets for sale

The communist-era jets, which include MiG-19, MiG-17 and MiG-21 models among others, have been out of commission for well over a decade. 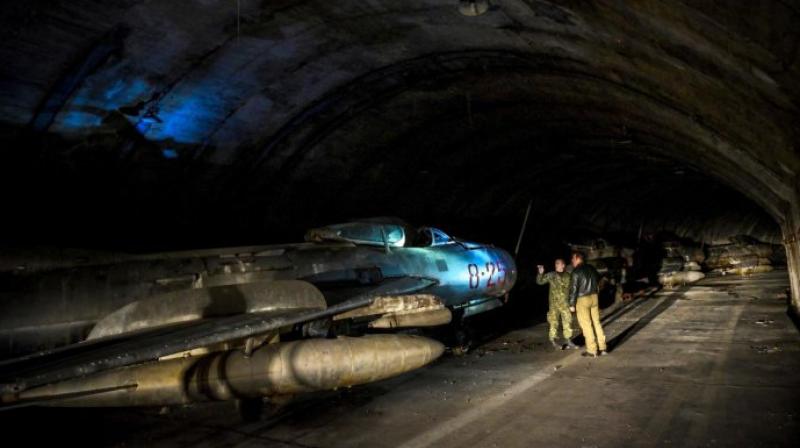 Albanian military personnel walk next to MIG-19 jet fighters inside the main tunnel of the Gjader Air Base built near the city of Lezhe. (Photo: AFP)

Albania: On a barren hillside in northern Albania lies a portal to the country's communist past: a massive steel door creaks open to reveal a hidden former air base burrowed into the heart of the mountain.

Made up of 600 metres (1,980 feet) of tunnels that once teemed with military life, the secret Gjader air base is now a depot for dozens of hulking communist-era MiG jets collecting dust in the darkness.

Three decades after shedding communism, Albanian authorities are still trying to sell off the Soviet and Chinese-made aircraft, of which there are dozens more in another nearby air base.

"Aligning our equipment and our weapons to the NATO standards" is part of Albania's "new chapter" with the Alliance, which it joined in 2009, says the military's Chief of Defence Bardhyl Kollcaku.

As for the MiGs, "apart from nostalgia, (for which) we will keep some of them in our museum... the rest will be treated according to the domestic legislation for sale or other usage," he told AFP.

The communist-era jets, which include MiG-19, MiG-17 and MiG-21 models among others, have been out of commission for well over a decade.

But museums, collectors and other aviation aficionados have already expressed interest in giving the relics a new home.

When Albania first discussed selling the MiGs in 2016, requests came in from the Air and Space Museum in France, as well as a flight school in Germany.

Yet no sales have been completed to date, with legal paperwork holding up the process.

Individuals are also on the waiting list, including Albania-based French businessman Julien Roche, who plans to install the plane in his garden.

"It's not so easy to get this kind of aircraft now, because all of them have been mainly destroyed, not stored like they are in Albania," he told AFP, from a house brimming with eccentric items.

He has put his name down for one of the oldest models, a Chinese-made MiG-15 with a price tag of around 10,000 euros (USD 11,000), which was used by North Koreans before being gifted to Albania.

Closed to the public

Like the 7,000 concrete security bunkers that dot the countryside, the clandestine Gjader base was part of former communist dictator Enver Hoxha's plan to fortify his hermit state against feared foreign invasions that never materialised.

More than 600 military personnel used to work inside the maze of tunnels that were shuttered in 2000 and remain off limits to the public.

Jets flown after 2000 used a different military base, until the last of the planes were taken out of service following an accident in 2004.

After opening up the dark and damp tunnels to AFP, the base's current commander Fatmir Danaj admits the old planes evoke an unexpected nostalgia.

"The pleasure of flying and of working in this base was unimaginable," 52-year-old Danaj said, as he shone his torch on a row of silver jets, which, as a young pilot, he used to land on the runway that feeds into the mountain.

Today, the scores of rooms inside -- including a cafeteria, dorms and array of other offices -- are empty except for a scattering of debris and the faded signs on their doors announcing their function.

In one empty office, a reminder still hangs on the wall: "Attention! Put documents in their files and submit them to the secret administrative office before leaving the workplace."

During his nearly 40 years of rule, Hoxha turned Albania into the most militarised country in the Balkans.

That backfired spectacularly in 1997, seven years after the fall of communism when the country was swept up by an armed rebellion that saw citizens raid armories and military bases for weapons.

Gjader was also breached, with people looting weapons and selling parts of some MiGs as scrap metal.

Today the Albanian Airforce has only a small fleet of helicopters and its air space is protected by NATO.

In a sign of the changing times, the first NATO base in the Balkan region will be built in Albania's Kucova, once known as "Stalin City" as a symbol of friendship at that time between Albania and the Soviet Union.

But Danaj still dreams of seeing Gjader returned to its former glory.

"The base could serve as a museum, but with its modern infrastructure, its tunnel system, it can be functional again and serve NATO," he said.