France close the Louvre to contain the spread of virus

The virus has now spread to 60 countries, with 3,000 fatalities reported 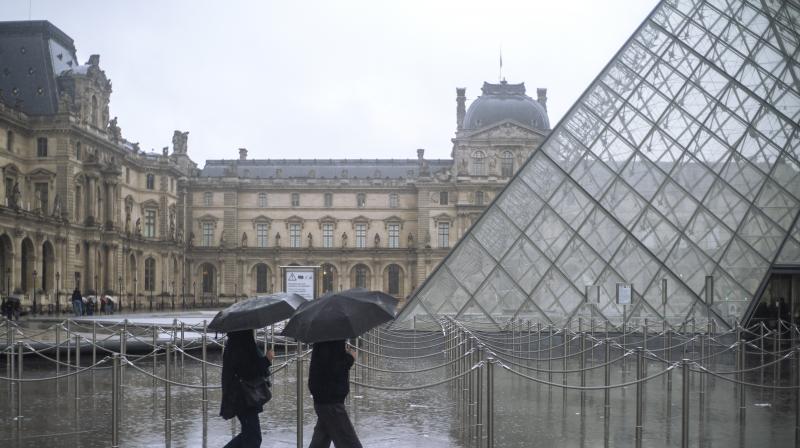 People walk by the Louvre museum, in Paris, France on Sunday. AP Photo

Paris: Coronavirus cases surged in Italy, and France closed the world-famous Louvre Museum as the coronavirus continues to threaten its tourism industry.

The virus has now spread to more than 60 countries, and more than 3,000 people have died from the illness it causes.

The virus sent financial markets plummeting, emptied the streets in many cities and rewritten the routines of millions of people. More than 88,000 have been infected, on every continent but Antarctica.

Italian authorities said the number of people infected in the country soared 50% to 1,694 in just 24 hours, and five more had died, bringing the death toll there to 34. Cases in France jumped to 130, an increase of 30 in one day.

China reported 202 new cases in its update on Monday, the lowest increase since the outbreak in its epicentre Wuhan. That brings China’s totals to 80,026 cases, with 2,912 deaths, the vast majority in Wuhan and surrounding Hubei province, which still accounts for about three-quarters of the world’s cases.

South Korea has the world’s second-highest cases with 4,212, mostly in and near the southeastern city of Daegu. It has reported 22 deaths. Iran’s death toll climbed to 54 and its cases jumped overnight by more than half, to 978.

Cases in the U.S. climbed to at least 80 with two deaths, both in Washington state.

While the virus has caused serious illness mainly for the elderly and those with existing health problems, most have had mild illness and some infected apparently show no symptoms at all.

But attempts to contain the spread of the virus have been far-reaching.

Sports teams have played in deserted stadiums in Japan and South Korea after leaders discouraged public gatherings. Tourist attractions across Asia, Europe and the Mideast were closed or deserted. Islam’s holiest sites have been closed to foreign pilgrims. And governments have closed schools and encouraged working from home.