The bill will then move to the Lords for debate from February 20, with the government hoping for their approval by March 7. 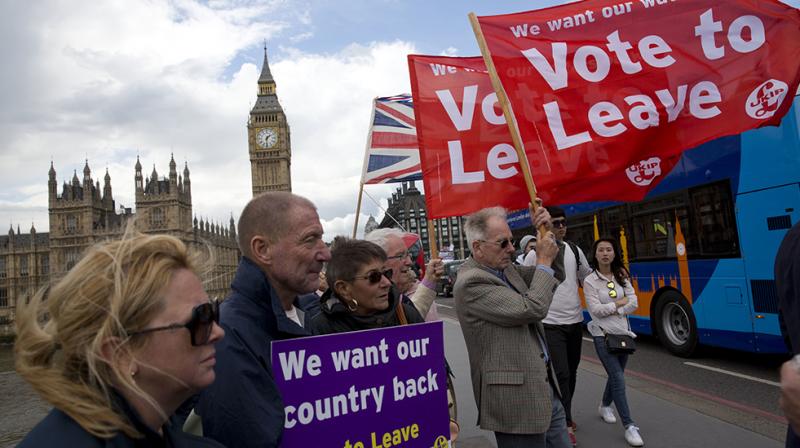 The vast majority of Leavers (86 percent) also believe Britain will be able to make up for any loss in trade with the EU through other deals, whereas 71 percent of Remainers believe it cannot. (Photo: AP)

London: British MPs on Wednesday approved the first stage of a bill empowering Prime Minister Theresa May to start pulling Britain out of the European Union.

MPs approved the bill, which would allow the government to trigger Article 50 of the EU's Lisbon Treaty and formally begin two years of exit negotiations, by a margin of 498 to 114.

It was the first Brexit-related vote in the House of Commons, coming after more than 17 hours of debate, with a second and final vote in the lower house set for next week.

The opposition Labour party ordered MPs not block the bill, but 47 rebelled against leader Jeremy Corbyn. He is yet to announce how he will respond to frontbenchers and other lawmakers who refused to tow the party line.

MPs on Wednesday also voted on a Scottish National Party (SNP) amendment seeking to derail the Brexit bill, defeating it by 336 votes to 100.

May is under intense pressure to push the bill through quickly, having promised EU leaders she would trigger Article 50 by the end of March.

She told MPs she would publish a long-awaited Brexit strategy paper on Thursday, opening it to parliamentary scrutiny while the Article 50 legislation makes its way through parliament.

"It will reflect the government's plan for Brexit," May's spokeswoman told reporters.

The government had sought to exclude parliament, insisting it had the power to trigger Article 50 on its own, but the Supreme Court last week ruled it must consult lawmakers.

Most MPs campaigned to stay in the EU ahead of last June's referendum, but as debate on the bill began Tuesday, many said they would accept the result, however reluctantly.

The bill could be delayed in the upper House of Lords, where May's Conservative Party does not have a majority -- and where the unelected peers have no fear of a public backlash.

A new survey revealed that MPs who campaigned to leave the EU are relatively united in what they want -- whereas those who were on the other side have more diverse views.

Some 72 percent of Leavers favour controlling immigration or not paying into the EU budget over retaining access to Europe's single market.

This reflects May's own position.

She has said she wants to end the free movement into Britain of people from the EU, a demand she acknowledges is incompatible with maintaining membership of the single market.

"Remainers are much more divided over what to prioritise -- which may well make them less able to shape the debate," said Anand Menon, director of the UK in a Changing Europe research programme.

The vast majority of Leavers (86 percent) also believe Britain will be able to make up for any loss in trade with the EU through other deals, whereas 71 percent of Remainers believe it cannot.

But Britain's former ambassador to the EU on Wednesday warned that the bloc would likely take a "hard line", demanding an exit bill of 40-60 billion euros ($43-$64.5 billion) as part of drawn out negotiations.

"This is a humongous negotiation and project," Ivan Rogers told MPs. "I think it will take years to get to the other side of it."

In a speech on Tuesday, Ken Clarke, who was the only Conservative MP to vote against the Brexit bill, accused Leavers of pursuing a fantasy "wonderland".

At just 143 words, the "European Union Notification of Withdrawal Bill" has been tightly drafted, making it difficult to amend either to delay the government's plans or to tie its hands in the talks.

But May's opponents are still trying, and dozens of amendments are scheduled for debate over three days in the House of Commons which begins on Monday.

The bill will then move to the Lords for debate from February 20, with the government hoping for their approval by March 7.