A social media mash-up by German television of Bercow trying to calm down rowdy MPs has been seen thousands of times. 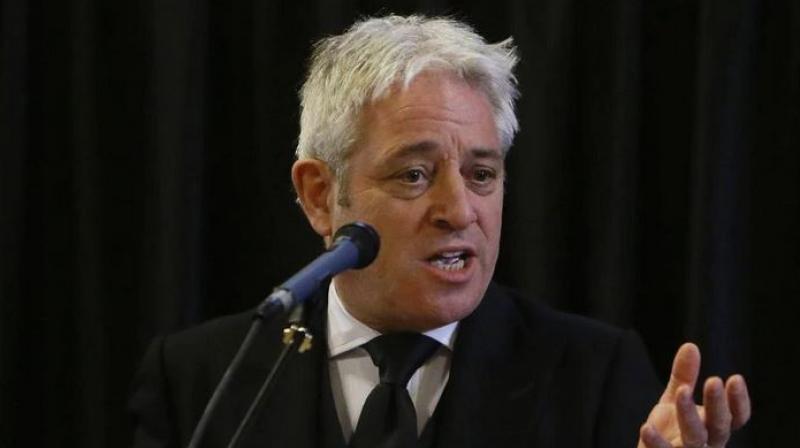 The man in the middle of more than three years of fiery parliamentary debates has proved a controversial figure, loathed by pro-Brexit supporters and hailed by its foes. (Photo: AP)

London: John Bercow stepped down on Thursday after 10 years as speaker of Britain’s House of Commons -- a role that rocketed him into the heart of the Brexit battle, and won him European fans.

The man in the middle of more than three years of fiery parliamentary debates has proved a controversial figure, loathed by pro-Brexit supporters and hailed by its foes.

Animated, verbose and with an idiosyncratic style, the 56-year-old Bercow has yelled “Order! Order!” more than 14,000 times during his tenure as the 157th speaker.

His detractors call him pompous -- one MP even branded him a “sanctimonious dwarf” -- but his backers say he has bolstered the rights of backbenchers to hold the government to account.

A social media mash-up by German television of Bercow trying to calm down rowdy MPs has been seen thousands of times. A Belgian newspaper called him “irreplaceable”.

Dutch daily De Volksrant wrote: “The only order in British politics comes from John Bercow’s mouth in these turbulent days.”

Both Britain’s main party leaders paid tribute to Bercow Wednesday as he chaired the weekly prime minister’s questions session for the final time.

“Although we may disagree about some of the legislative innovations you have favoured, there is no doubt in my mind that you have been a great servant of this parliament and of this House of Commons,” said Prime Minister Boris Johnson.

Johnson, in his own inimitable style, said the tennis fan had been “peppering every part of the chamber with (his) own thoughts and opinions, like some uncontrollable tennis ball machine, delivering a series of literally unplayable, unreturnable volleys and smashes”.

He also likened Bercow’s glare to a “trademark Tony Montana scowl”, after Al Pacino’s character in the 1983 film “Scarface”.

Opposition Labour party leader Jeremy Corbyn added: “You’ve done so much to reform this House of Commons and our democracy is the stronger for the way you have done it.”

Bercow will not stand in the December 12 general election.

His replacement as speaker will be chosen on Monday. Nine candidates are standing, including his three deputies and former Labour deputy leader Harriet Harman.

By convention, the main parties give the speaker a clear run in a general election, standing down their candidates.

Born in 1963 into a modest family, Bercow grew up in London and was a child tennis champion, leading to his lifelong love of the sport, notably Swiss great Roger Federer.

He was always a Conservative, but in his youth held hard-right views that he now rejects.

He became an MP in 1997 and 12 years later was elected as speaker, becoming the youngest person to hold the role for 100 years.

While the Brexit clashes came to dominate his tenure, Bercow also caused a stir by saying he would not allow US President Donald Trump to address parliament during a planned visit.

Bercow married Sally Illman in 2002 and they have three children.

She became a household name after posing for a photoshoot in Bercow’s official residence in the Houses of Parliament draped only a sheet, and appearing on the “Celebrity Big Brother” reality television programme.

The Daily Mail newspaper called him an “egotistical preening popinjay” who had “shamelessly put his anti-Brexit bias before the national interest -- and is a disgrace to his office”.

But Bercow’s supporters say he has sought to modernise parliament, abandoning the speaker’s traditional robes for a simple gown over a suit, and seeking to make it easier for female MPs with new babies.