In the training video, children aged between 9-13 years, were seen hunting down real prisoners and executing them in an abandoned building. 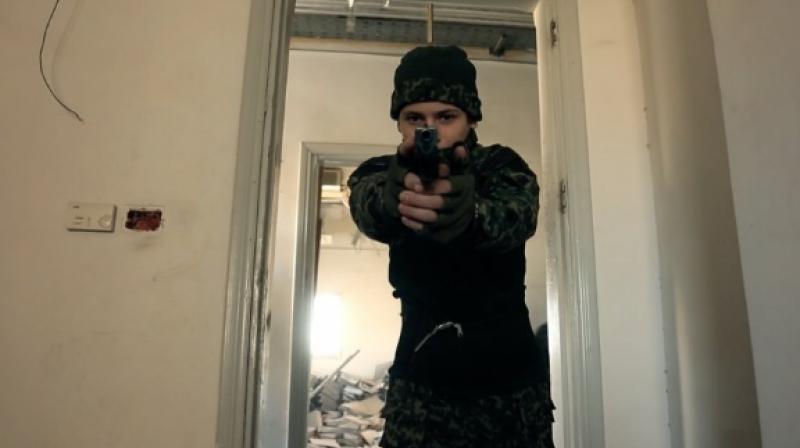 One of child fighters in the training video. (Photo: Twitter/Raqqa_SL)

Raqqa: In a disturbing video, footage of child soldiers chasing down and executing prisoners in a training exercise ISIS’s trademark cat and mouse style has emerged in Syria.

Carrying handguns, youngsters between ages 9-13 were ordered to take part in a training mission where they went around in an isolated building looking for tied-up captives, according to a report on Daily Mail.

The video spanning 34 minutes video titled ‘My father told me’, shows the next generation of the Caliphate in the ISIS stronghold of Raqqa going through military drills in the middle of the night and learning to use handheld rocket launchers.

Filmed in first-person, the video captured child warriors shooting one prisoner in the leg before killing him with a head shot. Another prisoner was cornered on a root top, before he takes the plunge ending his life.

While a few were video graphed learning to fire machine guns and martial arts, a few others were documented chanting jihadist statements to the camera.

However, the report claimed that this is not the first instance ISIS has released videos of training children. Earlier, the children were seen shooting prisoners in the back of their head apart from giving out bone-chilling threats to the terror outfit’s enemies.

The militant group had begun to ‘educate’ children the Daesh way, immediately after it seized power in parts of Syria and Iraq in 2013. Teachers were ordered to teach ISIS’s extreme interpretation of the Koran and orphanages were also built where children came under the patronage of ISIS commanders.