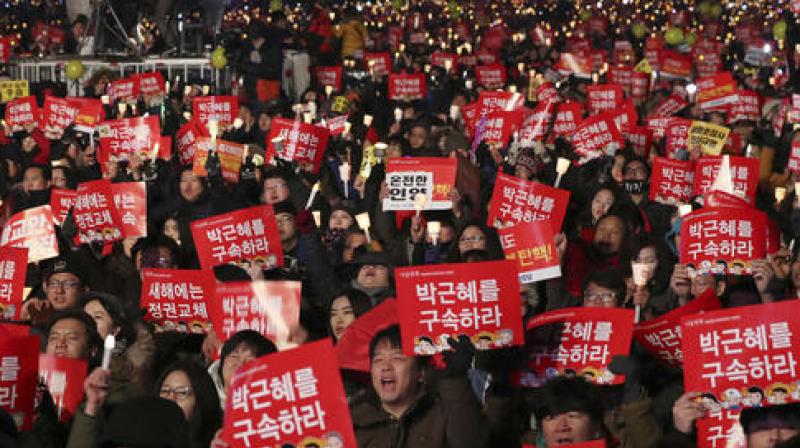 Carrying signs and candles and blowing horns, people packed a boulevard in front of an old palace gate that has been the center of massive but peaceful protests in recent weeks. (Photo: AP)

Seoul: Even on New Year's Eve, large crowds of South Koreans gathered to join another rally demanding the ouster of impeached President Park Geun-hye, who's determined to restore her powers through a court trial.

Carrying signs and candles and blowing horns, people packed a boulevard in front of an old palace gate that has been the center of massive but peaceful protests in recent weeks. Protesters later marched near Seoul's presidential palace and the Constitutional Court.

Park's supporters rallied in nearby streets, surrounded by thick lines of police.

The court has up to six months to decide whether Park should permanently step down over a corruption scandal or be reinstated. The judges said Friday that Park cannot be forced to testify in the impeachment trial as it enters its argument phase next week.

State prosecutors have accused Park of colluding with a longtime confidante to extort money and favors from the country's largest companies and allowing the friend to manipulate her administration. Park has apologized for putting faith in her jailed friend, Choi Soon-sil, but has denied any legal wrongdoing.

"Choi Soon-sil has shown us that our democracy was shattered," said Lee Hae-jin, who protested for the 10th consecutive Saturday in Seoul, carrying a large South Korean flag and wearing black traditional hanbok and a black dance mask that he said was a commentary on the state of the country's democracy.

State prosecutors have now handed over the investigation to a special prosecution team, which has been focusing on proving bribery suspicions between Park and the Samsung Group. The business giant is suspected of sponsoring Choi in exchange for government favors.

The deal shaved the fund's stake in one of the companies by an estimated hundreds of millions of dollars in value, but allowed Samsung scion Lee Jae-yong to promote a father-to-son succession of leadership and increase corporate wealth at the group.

Investigators also detained a literature professor from Ewha Womans University as they look into suspicions that the prestigious Seoul school manipulated its admission process to accept Choi's daughter, Yoora Chung, and afterward provided her academic favors.

The professor, Ryu Cheol-gyun, is a famous novelist who in 1997 wrote a story critics saw as glorifying Park's father, slain military dictator Park Chung-hee, whose legacy as a successful economic strategist is marred by violent records of civilian oppression.

Investigators are also looking into allegations that Park's administration blacklisted thousands of artists for their political beliefs.