US flies bombers, fighters in show of force against North Korea as tension soars

Trump has responded with his own threats, warning North Korea it would face “fire and fury” if it threatened the United States. 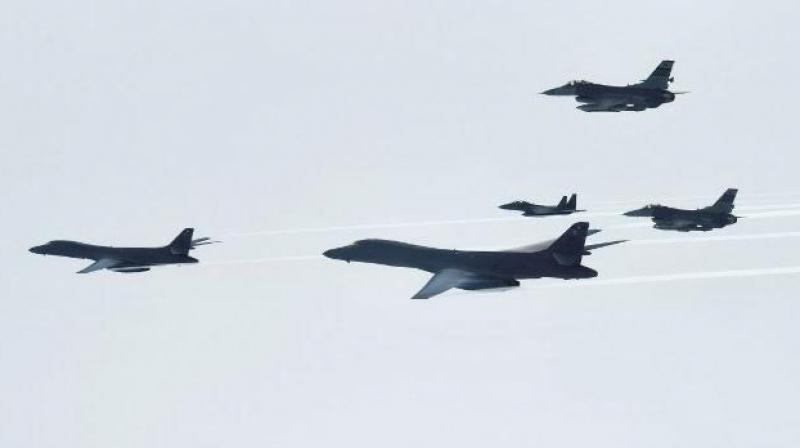 Such flyovers are common when animosity rises on the Korean Peninsula, official said. (Photo: AFP)

North Korea strongly objects to the exercises, which it sees as a preparation for invasion and has responded with a series of threats and missiles launches in recent weeks.

US President Donald Trump has responded with his own threats, warning North Korea it would face “fire and fury” if it threatened the United States and that the US military was “locked and loaded” in case of any provocation.

Trump on Wednesday declared “talking is not the answer” to resolving the long-standing impasse with North Korea.

“The US has been talking to North Korea, and paying them extortion money, for 25 years,” Trump, who last week said North Korean leader Kim Jong Un was “starting to respect” the United States, wrote on Twitter. “Talking is not the answer!”

However, US Defense Secretary Jim Mattis, when asked by reporters just hours later if the United States had run out of diplomatic solutions with North Korea, replied: “No.”

“We are never out of diplomatic solutions,” Mattis said before a meeting with his South Korean counterpart at the Pentagon. “We continue to work together, and the minister and I share a responsibility to provide for the protection of our nations, our populations and our interests.”

SANCTION OPTIONS
The 15-member U.N. Security Council on Tuesday condemned the firing of an intermediate range ballistic missile over Japan as “outrageous,” and demanded that North Korea halt its weapons program, but the US-drafted statement did not threaten new sanctions.

Asked if Japanese Prime Minister Shinzo Abe and Trump talked about restricting North Korea’s fuel supply when the two spoke by telephone on Wednesday, Chief Cabinet Secretary Yoshihide Suga said an embargo on oil and oil-related products would be an option.

A US ban on travel to North Korea comes into effect on Friday, curbing one of its few remaining supplies of foreign currency.

Defense ministry spokesman Ren Guoqiang told a monthly briefing that China would never allow war or chaos on the Korean peninsula, its doorstep, and military means were not an option.

“China strongly demands all sides to exercise restraint and remain calm and not do anything to worsen tensions,” Ren said, adding that Chinese forces were maintaining a normal state of alert along the North Korean border.

“I also want to stress that the current tense situation on the peninsula isn’t a screenplay or a video game,” she told reporters.

“It’s real, and is an immense and serious issue that directly involves the safety of people from both the north and south of the peninsula, as well as peace and stability of the entire region.”

KEY MILESTONE
Early in August, North Korea announced plans to fire four missiles into the sea near the US Pacific territory of Guam.

The Pentagon’s Missile Defense Agency and the crew of the guided-missile destroyer USS John Paul Jones conducted a “complex missile defense flight test” off Hawaii on Wednesday, resulting in the intercept of a medium-range ballistic missile target, the agency said.

The United States and South Korea are technically still at war with North Korea because their 1950-53 conflict ended in a truce, not a peace treaty.

North Korea routinely says it will never give up its weapons programs, calling them necessary to counter perceived American hostility.