Prosecutors can detain her for up to 20 days before formally charging her, meaning she will likely be in jail while her case is heard. 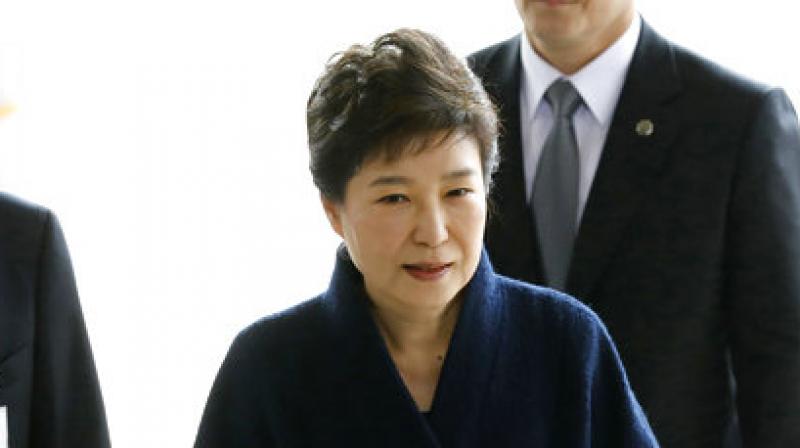 Prosecutors accuse Park of colluding with a confidante to extort big businesses, take a bribe from one of the companies and commit other wrongdoing. (Photo: AP)

Seoul: South Korea’s disgraced former President Park Geun-hye was arrested and jailed on Friday over high-profile corruption allegations that already ended her tumultuous four-year rule and prompted an election to find her successor.

A convoy of vehicles, including a black sedan carrying Park, entered a detention facility near Seoul after the Seoul Central District Court granted prosecutors’ request to arrest her.

Prosecutors can detain her for up to 20 days before formally charging her, meaning she will likely be in jail while her case is heard. A district court normally issues a ruling within six months of an indictment.

The Seoul court’s decision is yet another humiliating fall for Park, South Korea’s first female president who was elected in 2012 amid overwhelming support from conservatives, who recall her dictator father as a hero who lifted the country from poverty in the 1960-70s despite a record of severe human rights abuses.

Prosecutors accuse Park of colluding with a confidante to extort big businesses, take a bribe from one of the companies and commit other wrongdoing. The allegations led millions of South Koreans to protest in the streets every weekend for months before lawmakers impeached her in December and the Constitutional Court ruled in March to formally remove her from office.

It made Park the country’s first democratically elected leader to be forced from office since democracy came here in the late 1980s. South Korea will hold an election in May to choose Park’s successor. Opinion surveys say liberal opposition leader Moon Jae-in, who lost the 2012 election to Park, is the favourite.

Prosecutors can charge Park without arresting her. But they said they wanted to arrest her because the allegations against her are “grave” and because other suspects involved the scandal, including her confidante Choi Soon-sil and Samsung heir Lee Jae-yong, have already been arrested.

The Seoul court said it decided to approve Park’s arrest because it believes key allegations against her were confirmed and there were worries that she may try to destroy evidence.

Park’s conservative party described her arrest as “pitiful,” while the liberal politician favored in polls to succeed her said the country took a step toward restoring “justice and common sense.”

The camp of Moon Jae-in, who lost the 2012 presidential race to Park, said in a statement that the nation should now “turn the page on painful history” and focus on creating a fair and clean country.

A day earlier, Park was questioned at a court hearing for nearly nine hours. As she left for the hearing, hundreds of her supporters, many of them elderly citizens, gathered at her private Seoul home. They wept, chanted slogans and tried to block Park’s car before being pushed back by police.

In the coming weeks, prosecutors are expected to formally charge Park with extortion, bribery and abuse of power. Her bribery conviction alone is punishable by the minimum 10 years in prison and the maximum life imprisonment in South Korea.

Prosecutors believe Park conspired with Choi and a top presidential adviser to bully 16 business groups, including Samsung, to donate 77.4 billion won ($69 million) for the launch of two nonprofits that Choi controlled. Company executives said they felt forced to donate in fear of retaliatory measures including state tax investigations.

Park and Choi are accused of separately receiving a bribe from Samsung and colluding with top officials to blacklist artists critical of Park’s policies to deny them state financial assistance programs, according to prosecutors. Park also is alleged to have passed on state secrets to Choi via a presidential aide.