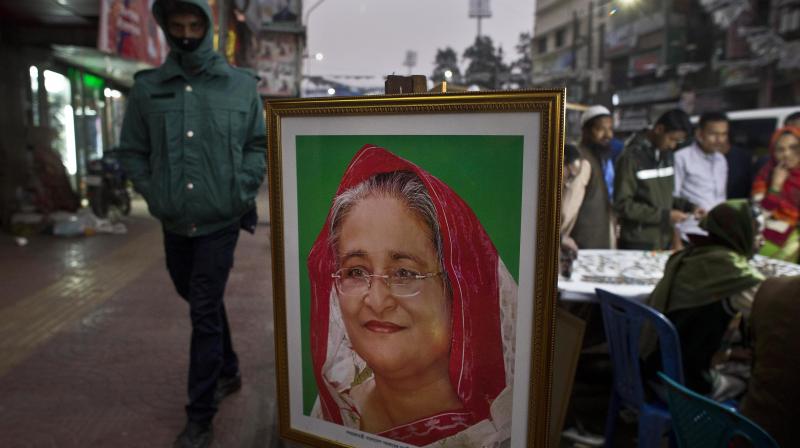 'People will cast their vote for Awami League to ensure the win of pro-Liberation forces,' Hasina said. (Photo: File | AP)

Dhaka: Voting began in Bangladesh on Sunday amid tight security following long campaign that was marred by violence and allegations of a government crackdown on opposition activists. Tens of thousands of people, including women, stood in long queues outside the polling booths as the voting started at 8 am (local time).

Prime Minister Sheikh Hasina was the first voter at the Dhaka City College centre in the capital where her lawyer nephew and party candidate Fazle Nur Taposh was a contender. "People will cast their vote for Awami League to ensure the win of pro-Liberation forces," Hasina said.

While Hasina is seeking re-election for a fourth term as the prime minister, her rival ex-premier Khalida Zia, who is reportedly partially paralysed, faces an uncertain future in a Dhaka jail.

Over 600,000 security personnel including several thousand soldiers and paramilitary border guards have been deployed across the country to help conduct the election in which 10.41 crore people are eligible to vote.

Security agencies have been asked to keep an extra vigil on religious minority communities as media reports said at least three Hindu households were set on fire by miscreants between December 16 and 26.

Bangladesh's telecoms regulator also ordered the country's mobile operators to shut down 3G and 4G services until midnight on Sunday "to prevent the spread of rumours" that could trigger unrest during the election, the 11th since Bangladesh won independence from Pakistan in 1971.

According to the Election Commission, 1,848 candidates are contesting for 299 out of 300 Parliament seats. The polls are being held at 40,183 polling stations.

Thirteen people have been killed and thousands injured in clashes between supporters of Hasina's ruling Awami League and activists of main opposition Bangladesh Nationalist Party (BNP) of Zia in pre-poll violence.

Hasina, who is seeking to return to power for a third consecutive time, on Saturday expressed fears that the opposition could boycott polls in the middle of voting as part of a "political trick" to evade a "humiliating defeat". "I want to caution all about the character of (main opposition) BNP...they may say in the middle (of the elections) that we are boycotting the polls," she said. "In that case (opposition boycott) I will ask our candidates and other contenders to continue polls until the voting is ended," 71-year-old Hasina said.

Her comments came as the BNP is contesting the polls in a state of disarray in the absence of 73-year-old Zia and her fugitive son Tarique Rahman who is the acting party chief.

Zia, serving a 10-year prison term on graft charges, has been barred from contesting the polls while Rahman is living in London ostensibly to evade the law as a court has sentenced him to life imprisonment for masterminding a grenade attack on a rally in 2004 that killed 24 Awami League leaders and activists.

The BNP has stayed out of parliament since 2014 when it boycotted the last election over its demands for a poll-time non-party government. It has returned to parliamentary politics as part of a new alliance - National Unity Front (NUF) - that was cobbled together three months ago with eminent lawyer Kamal Hossain as its convener.

Reacting to Hasina's remarks, BNP secretary general Mirza Fakhrul Islam Alamgir said, "There is no dispute in our party about taking part in the polls". "But what we see, there is no festive mood anywhere and rather a sense of fright is prevailing across the country due to government intimidation," he said.

BNP earlier accused the election commission of being biased during the poll campaign, a charge rejected by Chief Election Commissioner Nurul Huda. Huda acknowledged a media report about arrests of some polling agents of BNP candidates and called such action "unwanted".

"Unless someone is wanted under certain case, police must not arrest anyone...maintain utmost neutrality in discharging your duties," he said. "No member of law enforcement will arrest or harass polling agents of any candidate unless there are specific allegations against them," he said in a directive which he issued in a pre-poll press conference in Dhaka.

The opposition parties have alleged that thousands of their leaders and activists have been arrested. The CEC's comments came as BNP expressed doubts about credibility of Sunday's election alleging their supporters were intimidated and arrested while their agents too were being harassed to keep them away from polling centres.

Later BNP's Alamgir said "Now we've no expectation over the election. This election has become a complete mockery....the state, the government and the Election Commission are working together to turn it into a mockery. There's no question of win or defeat since it is not an election at all as a particular party is trying to snatch election victory by force and using the state machinery".

Alamgir, however, asked his party candidates to stay in the race until the voting ended while NUF convenor Hossain urged voters to "restore democracy" and exercise their franchise.

Army Chief General Aziz Ahmed urged voters to exercise their franchise without any fear saying more military personnel would be called out if required.