Afghans voted Saturday in the first round of a presidential race. 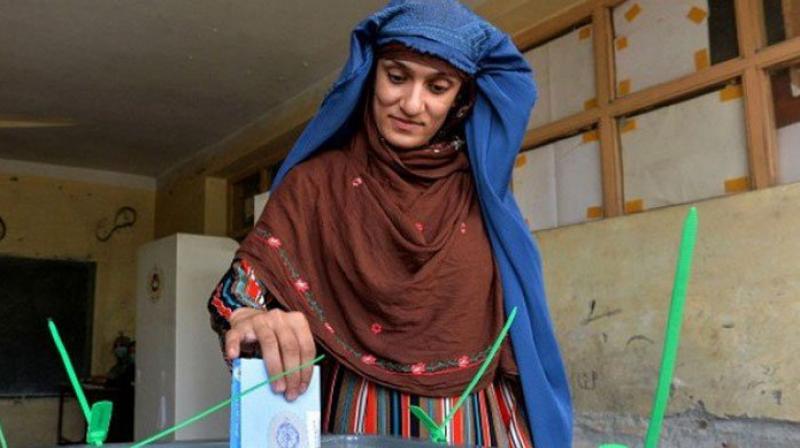 About 9.6 million Afghans in the war-torn nation -- with an estimated population of 35 million -- had registered to vote in the election, which was held at 4,905 polling centres. (Photo: AFP)

Kabul: Turnout in Afghanistan's presidential election appeared likely Sunday to hit a record low because of the threat of attacks, a muted campaign and concerns over fraud.

Afghans voted Saturday in the first round of a presidential race that will decide whether President Ashraf Ghani will win a second five-year term.

About 9.6 million Afghans in the war-torn nation -- with an estimated population of 35 million -- had registered to vote in the election, which was held at 4,905 polling centres.

A tally released late Sunday by the Independent Election Commission showed that with data collected from 3,736 polling centres, just over 2.19 million votes had been counted.

If that turnout trend holds, it would represent a participation level of about 25 percent -- lower than any of Afghanistan's three previous presidential elections.

In 2014, for instance, turnout was a little under 50 percent, although direct comparisons are tough because previous polls were tainted by allegations of systemic fraud.

United Nations Secretary General Antonio Guterres commended "all Afghans who exercised their democratic voice," and "congratulates them on their commitment to selecting their leaders through the ballot box."

Authorities heralded Saturday's election as a success because the Taliban were unable to pull off a large-scale attack resulting in high casualty numbers, and there were fewer technical difficulties than some had feared.

But the insurgents nonetheless pushed their offensive on the democratic process, conducting a string of bombings at polling stations and engaging Afghan security forces in clashes across the country.

According to the Afghanistan Analysts Network, which recorded incidents through various sources, more than 400 attacks were reported over the course of the election day.

The Taliban claimed to have conducted 531 attacks, while the interior ministry said "the enemy" had carried out 68 assaults.

The official death toll is five security forces. But in years past, authorities have suppressed information on election day only to later give larger numbers.

Still, Shaharzad Akbar, who heads the Afghan government's Independent Human Rights Commission, said she breathed "a sigh of relief" that the election had gone smoothly compared to previous years.

"The Afghan security forces really showed a real capability in managing the security situation across Afghanistan in ensuring people have access to polling centres," she told AFP.

But turnout was also hampered by scepticism about the electoral process. Previous polls, including the 2014 presidential election, were undermined by widespread allegations of vote-buying, ballot box stuffing and fraud.

And the election campaign itself seemed almost moribund during the two months of campaigning because many thought the poll -- already twice delayed while the US and the Taliban tried to negotiate a troop withdrawal deal -- would be pushed back yet again.

It was only after US President Donald Trump scuppered those talks on September 7 that candidates really believed the election would take place, leaving little time for them to campaign. Turnout was low because of security threats and "the weak campaigning of the candidates" political analyst and Kabul academic Atta Noori told AFP.

"It is not because they were not interested to vote," he said. Independent political analyst Haroun Mir said that even with a low turnout, the election could be considered a victory for the democratic process because it was "much cleaner" than previous polls.

The United States, which has repeatedly called on candidates to shun fraud, said "government institutions and leaders must be transparent and accountable to the Afghan people."

"We expect Afghanistan's institutions to take all necessary steps to ensure the election, including the investigation of complaints and tabulation of results, is transparent and credible to Afghan voters and the international community," a US State Department spokesperson said.

Election officials have said the result would be the purest yet, with equipment such as biometric fingerprint readers and better training for poll workers ensuring the vote was fair.

As of Sunday evening none of the candidates appeared to have raised any complaints.

Results are not expected until October 19. Candidates need more than 50 percent of the vote to be declared outright winner, or else the top two will head for a second round in November.