Armored personnel carriers, combat vehicles, helicopters and other pieces of military hardware were arrayed behind the troops. 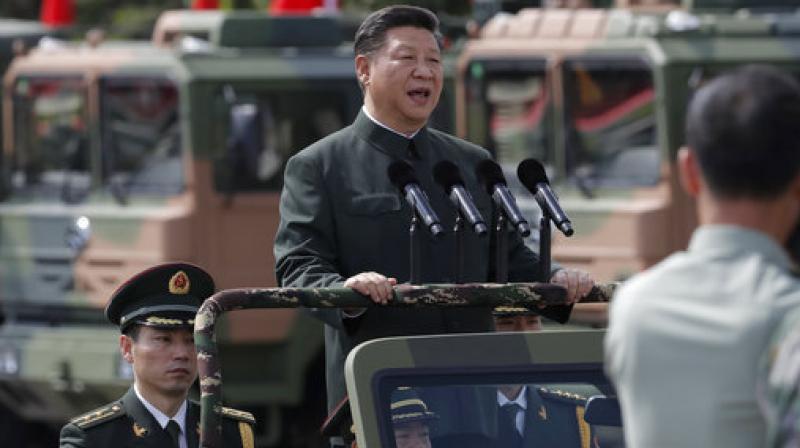 Hong Kong: President Xi Jinping inspected troops based in Hong Kong on Friday as he asserts Chinese authority over the former British colony China took control of 20 years ago.

Xi rode in an open-top jeep past rows of soldiers lined up on an airstrip on his visit to the People's Liberation Army garrison. He called out "Salute all the comrades" and "Salute to your dedication" as he rode by 3,100 soldiers arranged in 20 formations.

Armored personnel carriers, combat vehicles, helicopters and other pieces of military hardware were arrayed behind the troops. It was a rare display of the Chinese military's might in Hong Kong, where it normally maintains a low-key presence.

Xi, who's also chairman of the Central Military Commission, wore a buttoned-up black jacket in the steamy heat during his 10-minute review of the troops at the Shek Kong base in Hong Kong's suburban New Territories. It's part of a visit to mark the 20th anniversary of Hong Kong's handover, when Britain gave up control of the Asian financial hub to China on July 1, 1997.

Hong Kong was granted the freedom to run most of its affairs after it came under China's control under the "one country, two systems" principle. However, Beijing is in charge of the city's defense and foreign affairs and the troops based in the city are deployed from the mainland,

The Chinese military has its headquarters in a former British base downtown and has other installations around the city but troops are typically confined to base.

Xi's three-day visit to mark the anniversary includes presiding at the inauguration of the city's new leader, Carrie Lam, on Saturday. Security has been tight for his visit as authorities brace for protests.

Some 26 people, including young activist leader Joshua Wong, have been released on bail after being arrested for protesting on Wednesday. The department said Friday the activists have not been charged but are required to report back to police in September.

The activists, some of whom were detained more than 30 hours, had climbed onto a giant flower sculpture that was a gift from Beijing and is near the hotel complex where Xi is staying.

Pro-democracy supporters fear Beijing is tightening its grip on Hong Kong and undermining guarantees of wide autonomy under "one country, two systems." US officials said they were concerned that China's communist leaders weren't sticking to their promises.

"Looking ahead to the remaining 30 years of 'one country, two systems,' we cannot allow Hong Kong to go the way of Beijing's failed authoritarianism," US Sen. Marco Rubio, chair of the Congressional-Executive Commission on China, said in a statement.