Modi and Widodo recognised that access to reliable, clean and affordable energy is critical for the economic growth of both countries. 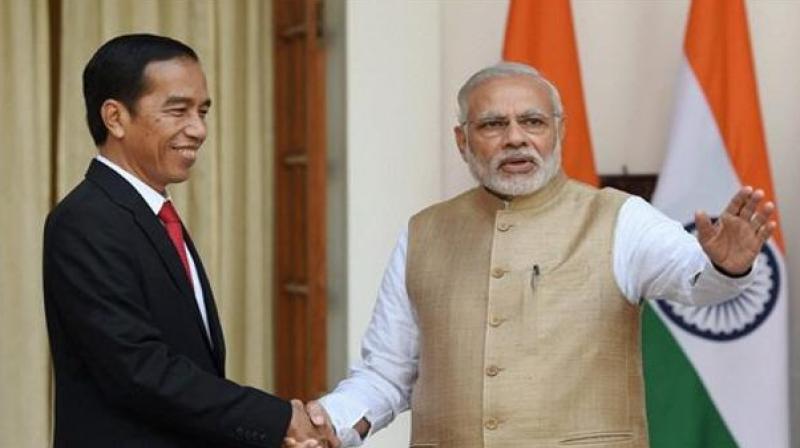 Both leaders agreed to address all issues related to obstacles to trade and investment in palm oil products and industries, the joint statement said. (Photo: AP)

Jakarta: India and Indonesia have agreed to double their efforts to boost bilateral trade to USD 50 billion by 2025, Prime Minister Narendra Modi said on Wednesday after holding comprehensive talks with President Joko Widodo.

Prime Minister Modi, who arrived in Jakarta on Tuesday night on his first-ever official visit to Indonesia, exchanged views with President Widodo on potential areas of cooperation in areas like defence, maritime security, trade and economy.

In a joint press statement after the talks, Modi said India and Indonesia have agreed to upgrade their ties to Comprehensive Strategic Partnership.

He said India and Indonesia have agreed to double their efforts to take bilateral trade to USD 50 billion by 2025. According to Indonesia's Central Statistics Agency (BPS), trade between the two countries in 2016 was USD 12.9 billion. It rose 28.7 per cent to USD 18.13 billion in 2017 with Indonesia's exports to India reaching USD 14.08 billion and its imports from India standing at USD 4.05 billion. In a joint statement issued after the talks, the two countries said they have agreed to work intensively for the early conclusion of the Regional Comprehensive Economic Partnership and reiterated that it needs to be comprehensive, fair and balanced with benefit to all member states.

The two leaders also instructed officials to optimise the cooperation between ASEAN and India for establishing a sustainable and mutually beneficial trade relations.

They also acknowledged the need to further explore the untapped economic potentials and to remove impediments to trade and investment. Both sides agreed that there are considerable potentials for expanding trade and services in various areas.

They noted that there were considerable cooperation opportunities in health and pharmaceutical sector. The two leaders further directed for the convening of a meeting in second half of 2018 comprising of health officials, drug regulators and industry representatives to develop a road map on health cooperation. They underscored the important role palm oil plays in Indonesia's export to India and in India's consumer preference and growing consumption.

Both leaders agreed to address all issues related to obstacles to trade and investment in palm oil products and industries, the joint statement said.

Both sides welcomed the MoU on cooperation in the railways sector which would promote technical cooperation, development of rail related programmes, exchange of knowledge, technology and institutional cooperation between India and Indonesia. The two leaders welcomed the establishment of direct flights by Garuda Indonesia between Bali and Mumbai starting from April 2018 as well as the flights by Batik Air and Air Asia Indonesia serving Indonesian and Indian cities.

They directed the civil aviation authorities of both countries to discuss the matter of enhancing the traffic rights through the bilateral air services consultation that will take place in 2018.

As maritime neighbours, the two countries underlined the importance of stronger connectivity, particularly on sea links, in order to facilitate economic cooperation and people-to-people contact. They welcomed the plan to build connectivity between Andaman Nicobar-Aceh to unleash the economic potentials of both areas. They appreciated the decision to set up a Joint Task Force to undertake projects for port related infrastructure in and around Sabang.

They recognised that access to reliable, clean and affordable energy is critical for the economic growth of both countries.

Both leaders agreed to cooperate in the promotion of energy efficiency technologies, new and renewable energy technologies, with the shared aspiration to ensure energy security and to replace the use of fossil fuel, as well as meet respective climate change targets, the statement said. Both leaders welcomed potential cooperation in the area of peaceful use of nuclear energy and looked forward to the early renewal of an agreement in this sector.