6 dead, over 100 displaced as cyclone Mora makes landfall in Bangladesh

1 of the 6 persons died of a heart attack during the storm while others were killed by falling trees, houses in Cox's Bazar and Rangamati. 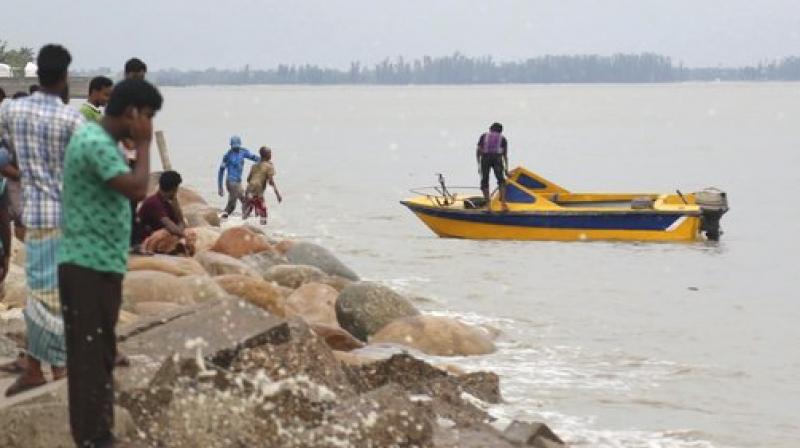 Dhaka: At least six persons were killed as Cyclone Mora made landfall in Bangladesh on Tuesday, packing winds of up to 150 kilometres per hour and damaging several houses, with authorities scrambling to evacuate over half a million people from the coastal areas.

It is likely to move in a northerly direction further, it said. One of the six persons died of a heart attack during the storm while others were killed by falling trees and houses in Cox's Bazar and Rangamati, sources said.

Under the cyclone's influence, gusty or squally wind with rain or thunder showers were continuing over North Bay and the coastal districts and maritime ports of Bangladesh, a report said.

"Wind speed is estimated at 130 kmph in Saint Martins Island and 150 kmph Cox's Bazar port after it hit the area in between 6 am and 7 am," Cox's Bazar Met official A K M Nazmul Haque said.

All flights were suspended to and from Chittagong international airport and the Cox's Bazar airports. As many as 300,000 people had been taken to shelters in more than ten districts most vulnerable to the cyclone, Additional Secretary Golam Mostafa, a spokesman for the disaster management ministry's control room, said.

"The people were moved out to at least 400 cyclone shelters or safer places like schools and government offices in the coastal areas," a disaster management ministry spokesman said.

There are also fears for the hundreds of thousands of Rohingya refugees living in makeshift homes after fleeing violence or persecution in neighbouring Myanmar. At least 2.5 million people in 10 districts risk falling in the way of the severe cyclonic storm.

The districts at risk were Cox's Bazar, Chittagong, Noakhali, Lakshmipur, Feni, Chandpur, Barguna, Patuakhali, Bhola, Barisal and Pirojpur. Prime Minister Sheikh Hasina was monitoring the situation from Vienna, where she has gone to attend a conference on atomic energy.

"The prime minister is maintaining round-the-clock communication with Dhaka on the storm situation. She has ordered all-out preparation to tackle the storm," said Ihsanul Karim, Prime Minister's press secretary.

Under the influence of the cyclonic storm, 'the low lying' areas of the coastal districts and their offshore islands were likely to be inundated by storm surge of 4-5 feet height above normal astronomical tide, the Met office said.

All fishing boats and trawlers over North Bay and deep sea have been advised to remain in shelter till further notice. The MeT office had issued the highest level of warning signal in a scale of 10 for two maritime ports after Mora developed into a severe cyclonic storm.

Cyclone Roanu hit the southern coast of Bangladesh in 2016, leaving 20 people dead and forcing half a million to flee their homes. The Mora cyclone formed after heavy rains in Sri Lanka caused floods and landslides killing over 180 people.