The border region has been emptied of most of its Muslim residents since late August. 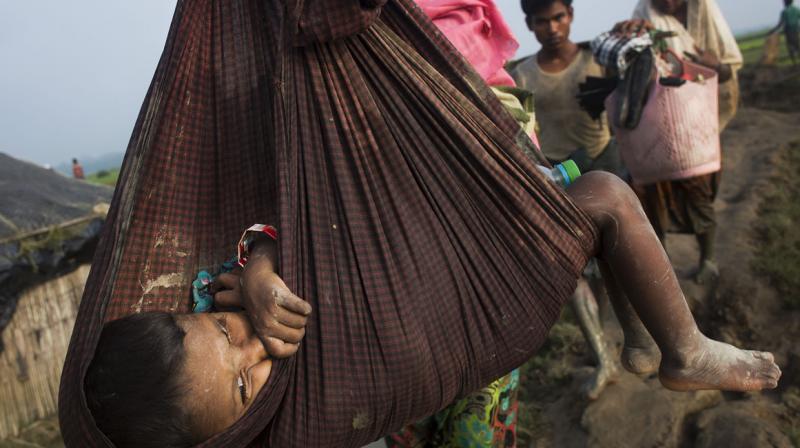 Under intense global pressure, Myanmar has agreed to repatriate “scrutinised” refugees who can prove their residence in Rakhine, but details of the plan remain thin. (Photo: AP)

Yangon: Myanmar’s government will harvest rice from abandoned farmland in violence-scorched northern Rakhine, state media said Saturday, a move likely to raise concerns about the prospect of return for more than half a million Rohingya who have fled communal unrest in the area.

The border region has been emptied of most of its Muslim residents since late August, when Myanmar’s military launched a crackdown on Rohingya rebels that the UN says likely amounts to ethnic cleansing.

Hundreds of villages have been razed to the ground, with more than 600,000 Rohingya - a stateless group in mainly Buddhist Myanmar - fleeing across the border for sanctuary in Bangladesh.

Under intense global pressure, Myanmar has agreed to repatriate “scrutinised” refugees who can prove their residence in Rakhine.

But details of the plan remain thin, seeding concern about who will be allowed back, what they will return to and how they will manage to live in a region where anti-Rohingya hatred remains sky-high.

On Saturday state media announced the government would begin harvesting 71,000 acres of rice paddy in Maungdaw - the Rohingya-majority area hardest-hit by the violence.

The Global New Light of Myanmar report said workers would be bused in from other parts of the country to assist with the harvest.

“For the time being, we were only assigned to harvest, dry and store,” said Then Wai, head of Maungdaw town’s Agricultural Department.

Government officials could not be reached for comment about what would happen to the rice or where the proceeds would go.

Myanmar denies the charge of ethnic cleansing and defends the military campaign as a counter offensive targeting Rohingya militants who attacked police posts in late August, killing at least a dozen.

But media, rights groups and the UN have documented consistent accounts of atrocities at the hands of Myanmar security officers.

On Friday UN rights experts said they were “deeply disturbed” after speaking to Rohingya refugees in Bangladesh.

The accounts they heard “point to a consistent, methodical pattern of actions resulting in gross human rights violations affecting hundreds of thousands of people,” said Marzuki Darusman, who chairs the fact-finding mission.

Myanmar’s civilian leader Aung San Suu Kyi - who has no control over the powerful army - recently created a committee to oversee resettlement in Rakhine, where tens of thousands of other minority groups were also internally displaced by the violence.

The construction of homes for minorities such as the Mro has begun, according to state media, while Suu Kyi’s government has enticed business tycoons to donate to the rebuilding effort.

But fear abounds that the rehabilitation will sideline the Rohingya - a group that has suffered under decades of state-backed discrimination.

Myanmar refuses to recognise the Rohingya as a distinct minority, rendering the 1.1-million strong group stateless.

The army has spread the view that they are foreign interlopers from Bangladesh, despite having lived in Myanmar for generations.