As the country experiences its second wave of virus spread, authorities issue warnings ahead of the holiday season 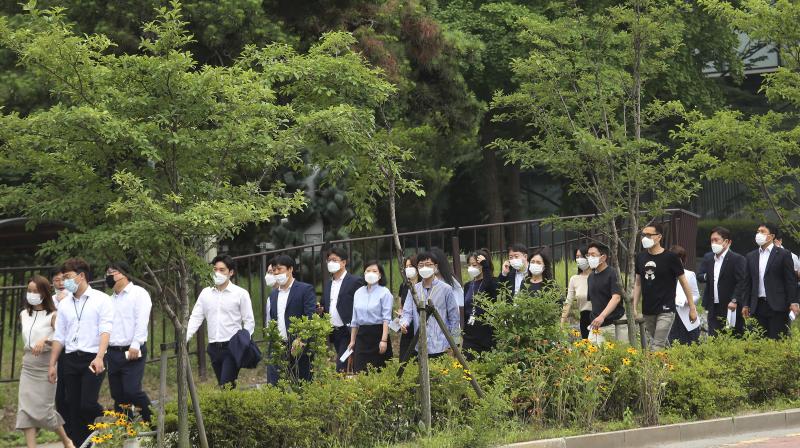 People wearing face masks to help protect against the spread of the new coronavirus cross a road in Seoul, Monday, June 29, 2020. (AP)

Seoul: South Korea’s health authorities called on Monday for citizens to stagger vacation schedules ahead of the holiday season and avoid gatherings at workplaces and religious facilities, as coronavirus infections from small clusters persist.

After battling the first major coronavirus epidemic outside China, South Korea managed to reduce the rates of daily infections to single digits by late April, propelled by an intensive tracking and testing campaign.

But just as social distancing rules were eased in May, a series of small outbreaks erupted from nightclubs, retailer warehouses, churches and door-to-door sales businesses, prompting the government to declare the beginning of a “second wave” of infections last week.

As of midnight Sunday, the Korea Centers for Disease Control and Prevention (KCDC) reported 42 new coronavirus cases, for a total of 12,757 cases with 282 deaths. On June 20, the daily tally reached 67, its highest since in more than three weeks.

South Korea’s President Moon Jae-in expressed concerns about the persistent infections ahead of the summer holiday season, calling for strict steps to prevent the virus.

“I hope it will give a breathing room for the domestic tourism industry and chances to rest and recharge for the people,” Moon told a meeting with senior aides.

About 1,600 members of a Christian church in southern Seoul are undergoing a check after one attendee was confirmed to have contracted the virus, and 28 of them have tested positive so far, Jeong said.

However, the government is discussing allowing limited numbers of spectators at professional sport matches including baseball, football and golf starting as early as next week, said Yoon Tae-ho, a senior official at the health ministry.