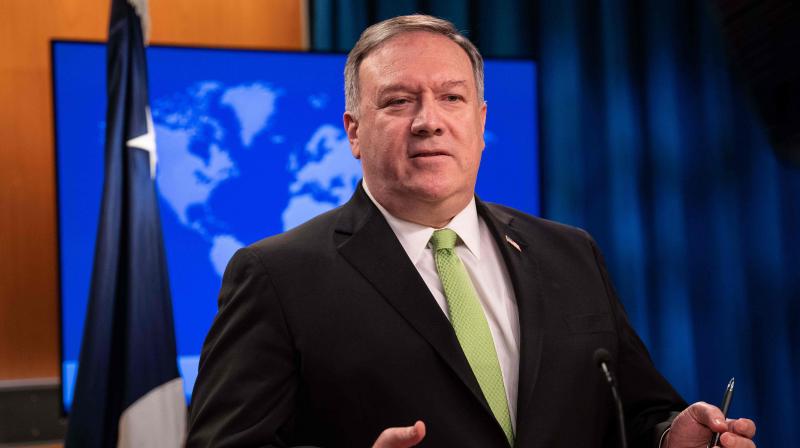 US Secretary of State Mike Pompeo speaks the press at the State Department in Washington. (AFP)

Washington: The United States will take action to prevent alleged espionage by Chinese students, Secretary of State Mike Pompeo said Thursday, ahead of an expected announcement by President Donald Trump.

Trump earlier said that he will hold a press conference Friday about China amid soaring tensions between the two powers, including over the status of Hong Kong and the novel coronavirus pandemic.

Asked about a report in The New York Times that Trump was considering throwing out thousands of graduate students, Pompeo said that Chinese students "shouldn't be here in our schools spying."

"We know we have this challenge. President Trump, I am confident, is going to take that on," Pompeo told Fox News, while declining to say if an action would be announced on Friday.

"We have an obligation -- a duty -- to make sure that students that are coming here to study... aren't acting on behalf of the Chinese Communist Party," Pompeo said.

The New York Times said that the Trump administration was considering annulling visas for thousands of graduate students linked to China's military.

The move would be certain to draw criticism from universities, which rely increasingly on tuition from foreign students -- of which China and India are the largest sources -- and have already been hit hard by the COVID-19 shutdown.

Asian American activists have long voiced concern that the targeting of Chinese students impacts their own community, with US citizens of Asian ancestry coming under unjustified suspicion.

"This isn't a red scare, this isn't racist. Chinese people are a great people," Pompeo said when asked about the concerns.

"This is like the days of the Soviet Union. This is a communist, tyrannical regime that poses real risk to the United States," he said.

Trump, in remarks to reporters, declined to preview the press conference on Friday but said, "We're not happy with China."

The press conference will come two days after Pompeo certified to Congress that Hong Kong was no longer autonomous from China, as promised by Beijing before Britain handed over its colony in 1997.

China has been pressing forward the drafting of a security law that Hong Kong activists say will end freedoms enjoyed in the financial capital, which was rocked by months of pro-democracy protests last year.

Washington and Beijing are already clashing over responsibility for the extent of the coronavirus pandemic, which originated in China but has spread worldwide and caused devastation in the United States.

Domestic critics accuse Trump of mismanagement and say that the 100,000 US deaths and massive unemployment were the result of a slow, patchy federal response to the virus' spread across the world's biggest economy.

But Trump blames the crisis on China and for a long time insisted on calling the COVID-19 sickness the "Chinese virus." He has threatened to cut off US funding for the World Health Organization, accusing the UN body of bias toward Beijing and assisting in a cover-up.