Pakistan law minister quits as govt gives in to protests 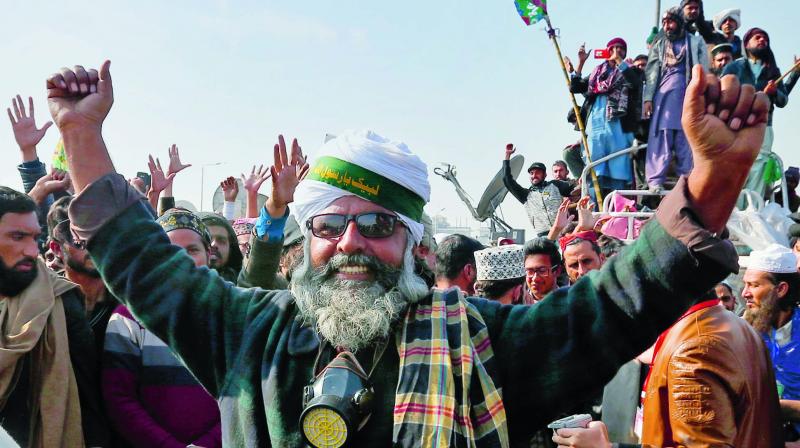 Islamabad: Pakistan law minister Zahid Hamid resigned on Monday as the military brokered a peace deal between the protesters and the government to end a three-week sit-in.

Leaders of Tehrik-e-Labbaik Ya Rasool Allah (TLYR) announced to end their 22-day long protest at Faizabad Interchange in Islamabad.

The announcement comes after law minister Zahid Hamid sent his resignation to Prime Minister Shahid Khaqan Abbasi while an agreement was also signed between the government and the protesting party’s leaders.

“On the assurance of the Chief of Army Staff (COAS) General Qamar Javed Bajwa, we are calling off the sit-in,” TLYR chief Khadim Hussain Rizvi told the crowd of around 2,500 demonstrators, who had occupied a main highway leading into the capital.

He added: “We have given a 12-hour deadline to the government to release all the arrested workers and meanwhile, we are winding up the things to call-off the protest.”

An official announcement will be made once over demands will be implemented, he added.

TLYR demanded law minister Zahid Hamid should be immediately suspended, but his party will not issue any ‘fatwa (religious decree)’ against him. PM Abbasi accepted Mr Hamid’s resignation to end the deadlock.

The government has already reinstated amendments to the Election Act 2017 clauses 7A and 7B relating to Khatm-e-Nabuwwat (finality of the Prophethood). The government will release the Raja Zafarul Haq’s report within 30 days.

It also demanded to release the participants of the sit-in and that the charges against them should be dropped. It also asked for the formation of an inquiry team to investigate the security action against TLYR sit-in on November 25. Those responsible should be prosecuted within 30 days.

On Saturday, nearly three weeks after the protests began, around 8,500 armed security personnel finally confronted the protesters, during which at least six people and injuring dozens.