The Cuban leader was awarded the title of ‘DPRK (North Korea) Hero’ for his efforts to strengthen relations between two countries. 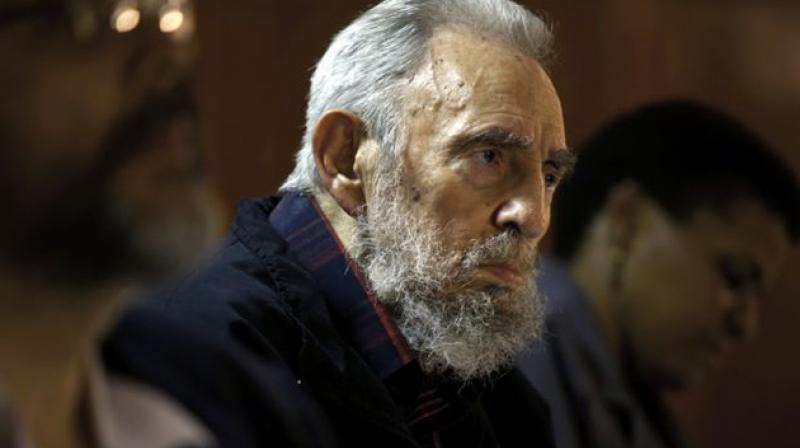 Flags flew at half-mast at official buildings across the country as a mark of respect for the revolutionary icon, despite a relationship that was often warmer in rhetoric than reality. (Photo: AP)

Pyongyang: North Korea began three days of official mourning on Monday for late Cuban leader Fidel Castro, remembering him as a "close friend" and heroic ally in a joint struggle against US aggression.

Flags flew at half-mast at official buildings across the country as a mark of respect for the revolutionary icon, despite a relationship that was often warmer in rhetoric than reality.

In the Pyongyang subway, commuters in one station crowded around a glass case containing a Castro obituary published by the ruling party newspaper, Rodong Sinmun.

Alongside a picture framed with a black border and showing a head-and-shoulder shot of a bearded Castro in full military dress, the obit recalled his visit to North Korea in 1986 when he met founder-leader Kim Il-Sung.

It noted that the Cuban leader was awarded the title of "DPRK (North Korea) Hero" for his efforts to strengthen relations between two countries "fighting in the outposts of the anti-US, anti-imperialist struggle."

"He was a great revolutionary. Until the last minute he supported and defended our revolution, and fought intensely for anti-imperialist independence and against America," Kim told AFP.

North Korean leader Kim Jong-Un sent a condolence message on Castro's death, calling him a "close friend and comrade" of the Korean people.

Castro only made the one visit to the North. The fact that it came decades after the Cuban revolution and Kim's ascent to power was partly a reflection of a geographical, cultural and often ideological divide that a shared hatred of the "US enemy" could never fully bridge.

Neither Kim Il-Sung nor his son and successor Kim Jong-Il who had a profound fear of flying ever made the trip to Havana.

During the 1970s they were rivals in the Non-Aligned Movement, with Castro favouring the Soviet Union while Kim Il-Sung kept an equal distance from Moscow and Beijing in a bid to play the communist giants off each other.

When Castro attended a NAM summit in Malaysia in 2003, he stopped off in China, Japan and Vietnam but not North Korea. But if personal chemistry was lacking, the two countries remained allies, with Cuba one of the few countries willing to flout the international sanctions imposed on the North over its nuclear weapons programme.

In 2013 Panama seized a North Korean ship carrying an undeclared Cuban arms shipment of Soviet-era weapons and fighter jets hidden under sacks of sugar. North Korea insisted the weapons were being shipped for repair, prior to their return.