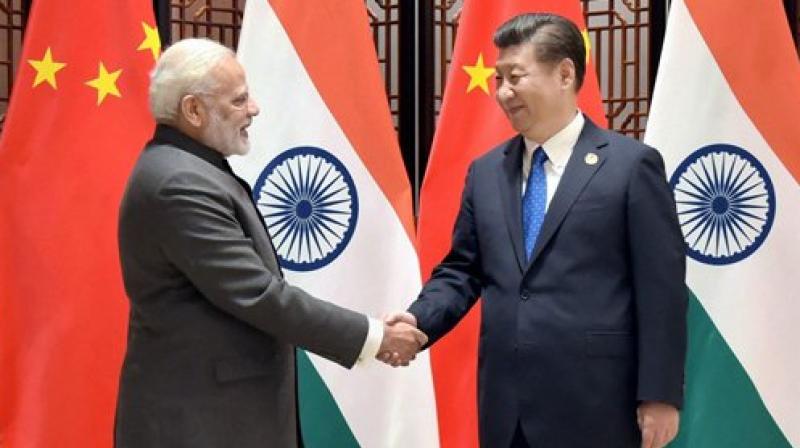 Chinese President Xi Jinping and Prime Minister Narendra Modi agreed in April to open a new chapter in ties, just months after a dispute over a stretch of their high-altitude Himalayan border rekindled fears of war. (Photo: File/PTI)

Beijing: A senior Chinese general will soon visit India, China’s Defence Ministry said on Thursday, as the neighbours step up efforts to reset ties following an ice-breaking summit between their leaders.

Chinese President Xi Jinping and Prime Minister Narendra Modi agreed in April to open a new chapter in ties, just months after a dispute over a stretch of their high-altitude Himalayan border rekindled fears of war.

Speaking at a monthly news briefing, Chinese Defence Ministry Spokesman Wu Qian said that Major General Liu Xiaowu, deputy commander of China’s western military region, would soon go to India, as well as Pakistan, though he did not give dates.

India’s old enemy Pakistan and China have close military relations and call each other “all weather friends”.

Liu would discuss border issues and cooperation as well as military exchanges while he was in these two countries, Wu said.

Hundreds of troops from both sides were deployed in 2017 on the Doklam plateau, near the borders of India, its ally Bhutan, and China after India objected to Chinese construction of a road in the Himalayan area in their most serious standoff in years.

There is still deep mistrust between the neighbours over their festering border dispute, which triggered a brief war in 1962.

However, in another sign China and India are trying to be friendlier to each other, Wu said that on June 21 Chinese and Indian border forces practiced Yoga together, to coincide with International Yoga Day.

Chinese soldiers also put on a display of martial arts, he added.