World   Asia  28 Jun 2018  China will not concede 'even an inch' of its territory: Xi tells Mattis
World, Asia

China will not concede 'even an inch' of its territory: Xi tells Mattis

US has been sending periodic air, naval expeditions to assert its right of freedom of navigation in SCS, most of which is claimed by China. 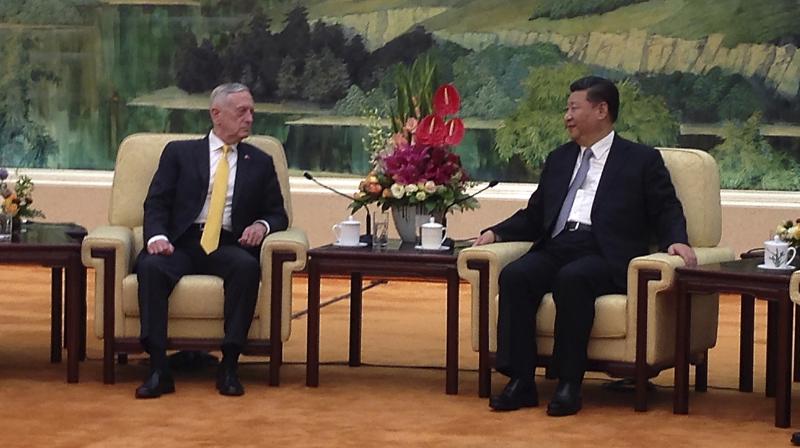 During his meeting with Mattis here on Wednesday, Xi said China and the US should promote the development of bilateral ties based on the principle of mutual respect and win-win cooperation. (Photo: AP)

Beijing: President Xi Jinping has told US Defence Secretary James Mattis that China will not concede "even an inch" of its territory passed down from ancestors, in an apparent reference to the disputed South China Sea.

China is engaged in hotly contested territorial disputes in both the South China Sea (SCS) and the East China Sea (ECS). Beijing claims almost all of the SCS. Vietnam, the Philippines, Malaysia, Brunei and Taiwan have counterclaims over the vital transit route for world trade.

The US views China's militarisation of the SCS a reason of tension in the Sino-US ties.

The US has been sending periodic air and naval expeditions to assert its right of the freedom of the navigation in the area, most of which is claimed by China.

During his meeting with Mattis here on Wednesday, Xi said China and the US should promote the development of bilateral ties based on the principle of mutual respect and win-win cooperation.

"When we see common interests between China and the US, we do not shy away from differences. Our stance is steadfast and clear-cut when it comes to China's sovereignty and territorial integrity," he said, adding that "any inch of territory passed down from ancestors cannot be lost, while we want nothing from others."

As an important part of bilateral relations, Xi said, the US and China military relations have maintained a sound development momentum in the recent years. "It has long been known that the real experts on military affairs do not want to employ military means to solve issues," Xi was quoted as saying by the state-run Xinhua news agency.

Asserting that Sino-US relation is one of the most important bilateral ties in the world, the Chinese President said, "The history and reality since the establishment of bilateral diplomatic ties in nearly 40 years have proved that the sound development of China-US ties can benefit people of both the countries and the world, and is also conducive to world and regional peace, stability and prosperity."

China and the US share common interests in extensive areas and common ground far outweighs differences, he said. "The Pacific Ocean is vast enough to accommodate China and the US, as well as other countries," he said.

Xi's comments to Mattis was significant as the US Defence Secretary is a strong advocate of proactive US policy in the South China Sea to contain China's efforts to consolidate its hold by installing military bases on the reclaimed islands.

Mattis' meeting with Xi also took place amid the spiralling tariff spat between US and China over President Donald Trump's demand to rapidly reduce the USD 375 billion trade deficit between the two countries.

China has also stepped up its military drills in Taiwan straits to pressure Taiwan, which it claims is part of the mainland China. "There are some issues concerning China's sovereignty and territorial integrity which have become increasingly tense because of the US moves," such as the SCS issues and the Taiwan question, Chinese experts said referring to Xi-Mattis meeting.

"So, through the meeting, China is sending a warning to the US by reaffirming its bottom line," Diao Daming, an American studies expert and associate professor at the Renmin University of China, told the state-run Global Times.

"Mattis has heard the most authoritative voice from China on these issues and questions, and this might indicate that China's legitimate activities in regions like the SCS and the Taiwan Straits won't be affected by military actions from the US," Xu Guangyu, a retired PLA major general and senior adviser to the China Arms Control and Disarmament Association told the daily.