The Beijing legislature is expected on Thursday to move forward on the law, bypassing Hong Kong's own lawmaking body 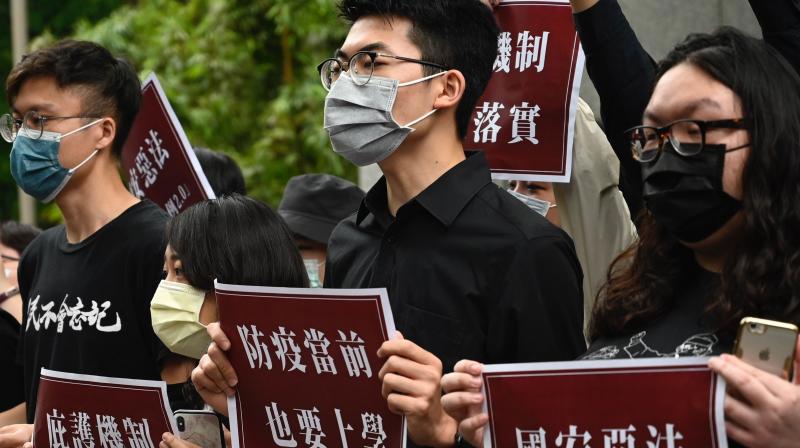 Students from Hong Kong and Taiwan display placards reading “Bad laws of China’s national security" during a protest outside the Hong Kong’s Taipei office on May 28, 2020. (AFP)

United Nations, United States: Washington on Wednesday requested an emergency UN meeting over a controversial security law China has proposed for Hong Kong, but Beijing refused to allow it to proceed, according to US diplomats.

The US spelt out its desire for the Security Council session, saying it was "deeply concerned" by Beijing's move, which would ban "sedition" and other perceived offences in the international finance hub.

Hong Kong activists say that the proposed law effectively abolishes the basic freedoms enjoyed in the city since it was returned to China by the British in 1997.

It will "fundamentally undermine Hong Kong's high degree of autonomy and freedoms as guaranteed under the Sino-British Joint Declaration of 1984, which was registered with the UN as a legally binding treaty," Washington's UN mission said in a statement.

"This is a matter of urgent global concern that implicates international peace and security," the statement continued.

But, it said, China has "has refused to allow this virtual meeting to proceed."

Thanks to new coronavirus-era procedures, Security Council videoconferences must be agreed upon by all 15 members, though normally a meeting can only be contested if a member convinces eight others to join the protest in a procedural vote.

"This is another example of the Chinese Communist Party's fear of transparency and international accountability for its actions," the US statement said.

China's ambassador to the UN Zhang Jun responded in a tweet Wednesday evening, saying the US's request was "baseless."

"Legislation on national security for Hong Kong is purely China's internal affairs," he said. "It has nothing to do with the mandate of the Security Council."

The Beijing legislature is expected on Thursday to move forward on the law, bypassing Hong Kong's own lawmaking body.

The US had already announced earlier Wednesday that Hong Kong would no longer enjoy the autonomy promised by China under US law, opening the door to potential trade retaliation.