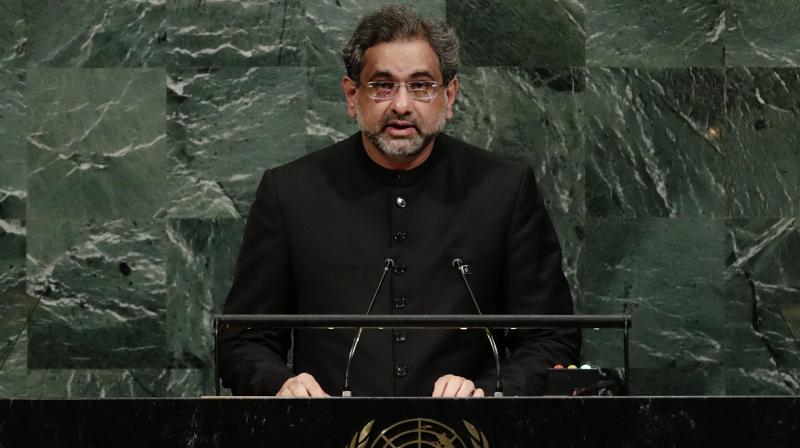 The order is being seen as Islamabad's efforts towards incorporating the disputed region as its fifth province. Civil rights groups in Pakistan have criticised the order. (Photo: File/AP)

Islamabad: Pakistan Prime Minister Shahid Khaqan Abbasi has rejected the Opposition's protest against a new order relating to administrative control over Gilgit-Baltistan, saying he has no authority over the region after the devolution of all the powers to local representatives.

Pakistan's Cabinet on May 21 approved Gilgit-Baltistan Order 2018 which was also endorsed by the assembly of the region. The order is being seen as Islamabad's efforts towards incorporating the disputed region as its fifth province. Civil rights groups in Pakistan have criticised the order.

A complete strike was observed across Gilgit-Baltistan on May 27 on the call of the joint Opposition to protest against the order.

India on Sunday summoned Pakistan's Deputy High Commissioner Syed Haider Shah in New Delhi and lodged a strong protest over Islamabad's latest move, saying any action to alter the status of any part of the territory under its "forcible and illegal occupation" has no legal basis. The order has also sparked several protests in the region.

Abbasi said that under the order, all the powers have been transferred to the people of Gilgit-Baltistan who will enjoy similar rights which the people of other provinces have without any discrimination. He said his government was ready to accommodate more demands from the representatives of the area.

He said that the once powerful GB Council would function as an advisory body only. He said he was amazed that some opposition parties were protesting against the law. "If they had listened, they would have noticed that all powers had already been transferred to local representatives under the Gilgit-Baltistan Order 2018," he said.

Referring to the China-Pakistan Economic Corridor (CPEC), the premier expressed hope that the region would be the most prosperous and developed area of the country under the project. He said the international issues related to the region might go on, but it was a proud moment for the government as the people of Gilgit-Baltistan would have the same rights which the people of other parts of the country enjoyed.

When Abbasi was about to start his speech, Leader of the Opposition in GB Assembly Mohammad Shafi Khan stood up from his seat and interrupted the CM to say Gilgit-Baltistan people had principally rejected the order. “How can GB be governed through orders?” he asked.

Khan announced that the opposition parties had decided principally not to accept any order without constitutional protection. Other opposition members including Javed Hussain of Pakistan Peoples Party, Raja Jahanzeb of Pakistan Tehreek-i-Insaf and Nawaz Naji of Balawaristan National Front stood up and shouted the slogan “orders not accepted”. The opposition lawmakers also tore the copies of the agenda.

During the protest, a scuffle erupted between the opposition and ruling party members. The opposition parties later staged a walkout. Following the walkout by the opposition, the prime minister began his speech.