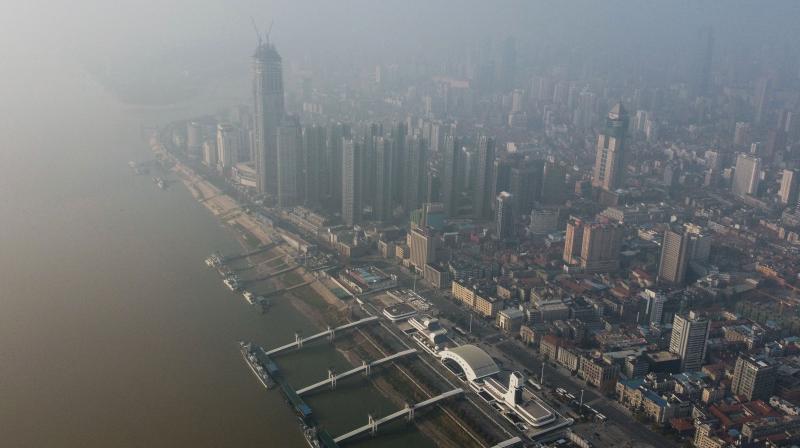 Aerial view of Wuhan in China's central Hubei province, which is the epicenter of the deadly coronavirus outbreak. (AFP)

BEIJING: China's toll due to the coronavirus outbreak rose by 26 to at least 106 on Tuesday. The total includes the first death in Beijing, the Chinese capital, and 24 more fatalities in Hubei province, where the first illnesses from the newly identified coronavirus occurred in December.

China has been making increasingly drastic containment efforts, which began with the suspension of plane, train and bus links to Wuhan, a city of 11 million people. That lockdown has since expanded to 17 cities with more than 50 million people in the most far-reaching disease-control measures ever imposed. Millions of people are under quarantine restrictions. Citizens have been told to delay overseas travel.

China extended the Lunar New Year holiday by three days to Sunday to reduce the risk of infection by keeping offices and factories nationwide closed and the public at home. The government of Shanghai, a global business centre and home to 25 million people, extended the holiday by an additional week to Feb. 9.

U.S. health officials expanded their recommendation for people to avoid non-essential travel to any part of China, rather than just Wuhan and other areas most affected by the outbreak.

There were 1,771 new cases confirmed in China on Monday, raising the national total to 4,515, according to the National Health Commission. It said 976 people were in a serious condition.

The government has sent 6,000 extra medical workers to Wuhan from across China, including 1,800 who were due to arrive Tuesday, a commission official, Jiao Yahui, said at a news conference.

China has reported eight cases in Hong Kong and five in Macao, and more than 45 cases have been confirmed elsewhere in the world. Almost all involve mainland Chinese tourists or people who visited Wuhan.