Christian leaders say many have left Bangladesh in recent years as the community increasingly finds itself targeted by Islamists. 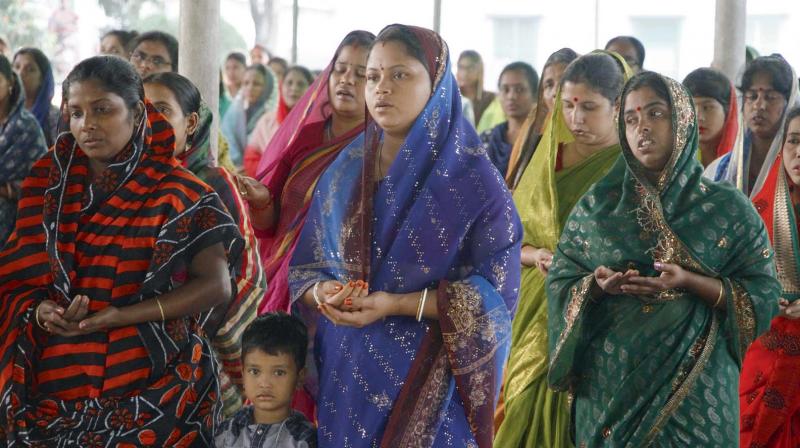 Nagori, Bangladesh: As a young man Bidhan Kamol Rosario left his Catholic village to fight for Bangladesh’s independence. Now he questions his future in the country after a rise in Islamist extremism that has left minorities living in fear.

As Bangladesh’s small Catholic community eagerly awaits the first visit by a pope in more than 30 years, many say it has never been more difficult to practise their faith in the Muslim-majority country.

Christian leaders say many have left Bangladesh in recent years as the community increasingly finds itself targeted by Islamists.

Last year two converts from Islam were murdered and a Catholic grocer brutally hacked to death during a campaign by Islamist extremists that also targeted Hindus and other minorities.

“In the War of Liberation, we wanted a beautiful Bangladesh which embraced all types of people from all races, faiths, creeds and religions,” said Rosario, 65, of the 1971 war that brought independence for the former East Pakistan.

“I never wanted advantages or favours for myself, only that there be equal rights for all... But now I do not believe there is any equality for us.”

Christians make up less than 0.5 per cent of Bangladesh’s 160 million people, but lived for centuries in harmony with the local Muslim majority.

They have played a prominent role in the country’s history and even today, schools and hospitals run by Catholic missionaries provide a lifeline for poor communities.

Rosario is part of a small Catholic community descended from Portuguese traders who settled in Nagori, a small cluster of villages near the capital Dhaka, in the 17th century.

The area remains a bulwark of Catholicism and is home to a small shrine where hundreds of thousands gather every February to celebrate the life of Saint Anthony.

Local Catholics there say they feel increasingly under threat after a spate of attacks by hardline Islamists targeting religious minorities, foreigners and secular bloggers.

Tensions with Bangladeshi authorities have also risen, they say, boiling over in March when villagers accused plain clothes police of raiding the home of a local widow and stealing money.

When a group of villagers tried to prevent the plain clothes officers leaving, armed police were sent in, leading to a violent stand-off in which at least 20 people were injured. More than 100 villagers were later charged with obstructing police work.

Alcohol has also become an issue. Non-Muslims can drink legally in Bangladesh, but locals say they have come under scrutiny from police, who frequently arrest villagers they suspect of consuming alcohol.

But far more terrifying are the threats to the lives of prominent Christians, which are often anonymous.

Nirmal Rosario, a businessman who heads a major Dhaka cooperative, said he received a death threat by text message as he sat next to Bangladesh’s Prime Minister Sheikh Hasina during a 2015 ceremony to mark Christmas eve.

“I have never seen these things before. We grew up in perfect harmony with other faiths,” he told AFP.

Pope Francis will bring a message of peace and religious tolerance on his visit to Bangladesh, an impoverished country that has won praise in recent months for taking in more than 600,000 Rohingya refugees from neighbouring Myanmar.

He is not scheduled to travel to the overcrowded camps in southern Bangladesh, but will meet a small group of Rohingya during an interfaith meeting in Dhaka on Friday.

Ahead of the Pope’s visit Gabriel Amal Costa, a Bangladeshi missionary, said a rise in Islamist extremism was straining religious ties.

“People had always lived together peacefully in Bangladesh, but unfortunately now Islamist extremism is on the rise,” he told AFP in Rome.

“This is a very recent phenomenon and the Church is trying to promote interfaith dialogue,” he said in comments translated from Italian.

The attacks reached a peak last year, but the situation has improved since a major crackdown in which scores of suspected militants were shot dead and hundreds arrested.

Jayanta Gomes, priest at the Saint Nicholas Tolentino church at Nagori, said he was hopeful the Pope’s visit would bring further comfort to the community.

“I am optimistic,” he said as he led an open air service for about 1,000 Catholics who sang Bengali-language hymns in the sun.

“The security situation is already much better, and the Pope’s visit next week will usher in peace for all of us in Bangladesh.”