Tourism business has slumped in Bali since September when Agung's volcanic tremors began to increase. 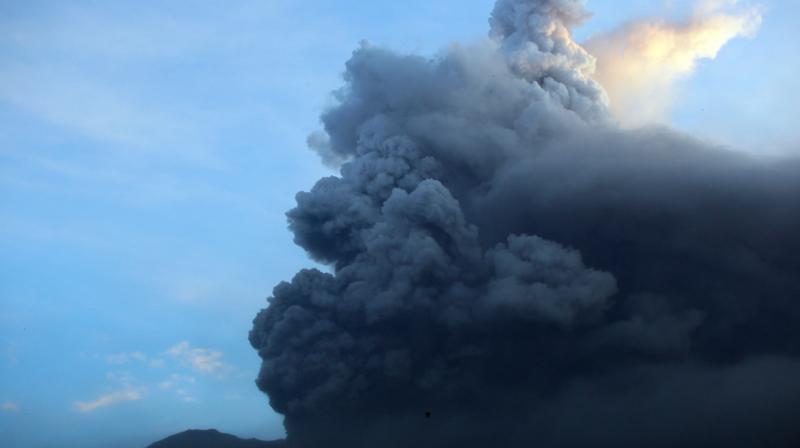 Bali's airport was closed for 24 hours, disrupting 445 flights and some 59,000 passengers, due to the eruption warning and the presence of volcanic ash from Agung. (Photo: AP)

Denpasar: Indonesia raised its warning for Bali's Mount Agung volcano to the highest 'level four' alert on Monday, closed the holiday island's airport and told residents near the summit to immediately evacuate, warning of the "imminent" risk of a larger eruption.

Bali's airport was closed for 24 hours, disrupting 445 flights and some 59,000 passengers, due to the eruption warning and the presence of volcanic ash from Agung.

TV footage showed cold lava flows (lahar) at a number of locations on the mountainside. Lahar carrying mud and large boulders can destroy houses, bridges and roads in its path.

"Plumes of smoke are occasionally accompanied by explosive eruptions and the sound of weak blasts that can be heard up to 12 km (7 miles) from the peak," the Disaster Mitigation Agency (BNPB) said in a statement.

"The potential for a larger eruption is imminent," it said, referring to the visibility of the glow from magma at Agung's summit overnight.

Residents were warned to "immediately evacuate" a danger zone that circles Agung in a radius of 8-10 km (5-6 miles).

"I'm not worried (but) my friends in Russia are a little bit worried," said a Russian tourist, who only wanted to be identified as Dmitry, at an observation post in Rendang in Bali's east.

Bali, famous for its surf, beaches and temples, attracted nearly 5 million visitors in 2016, and its international airport serves as a transport hub for the chain of islands in Indonesia's eastern archipelago.

Tourism business has slumped in Bali since September when Agung's volcanic tremors began to increase.

"In anticipation of the possibility and imminent risk of disaster, PVMBG (the Volcanology and Geological Disaster Mitigation Centre) raised Mount Agung alert level from three to four," it said in a statement.

According to the Volcanic Ash Advisory Centre in nearby Darwin, Australia, there is "ash confirmed on the ground at Denpasar Airport" as well as ash at FL300 (which refers to flight level at 30,000 feet) in the vicinity of the volcano.

Bali's I Gusti Ngurah Rai airport, which is about 60 km (40 miles) from the volcano, will be closed for 24 hours, according to a statement from its operator. It said a total of 445 flights - 196 international and 249 domestic - and 59,000 passengers had been affected.

Five alternative airports have been prepared for airlines to divert inbound flights, such as airports in neighbouring provinces, the statement said.

"It is a little bit frustrating because I checked the internet…everything was on schedule, now I am standing here everything was closed," said Jan Nicolai from Germany at Bali's airport.

Television footage showed hundreds of holidaymakers camped inside the airport terminal, some sleeping on their bags, others using mobile telephones.

"We have been here (in Bali) for three days we are about to leave today, but just found out our flights have been canceled. We have got no information because the gates, the check-ins have been closed indefinitely," said Carlo Oben from Los Angeles.

A transport ministry spokesman said the main airport on the neighbouring island of Lombok had reopened after "no volcanic ash was detected".

Airlines avoid flying when volcanic ash is present because it can cause significant damage to aircraft engines, leading to possible engine failure, and can clog fuel and cooling systems and hamper pilot visibility.

In June 1982, a British Airways 747 suffered severe damage and had all four engines flame out after encountering ash from Mount Galunggung in Indonesia. It descended to 12,000 feet before being able to restart some engines and make an emergency landing in Jakarta.

The alert level on Agung had been raised to the maximum in September, but was lowered in October when seismic activity calmed. However, volcanologists now say the volcano has entered a new phase with magma now visible and meaning a greater risk of a large eruption.