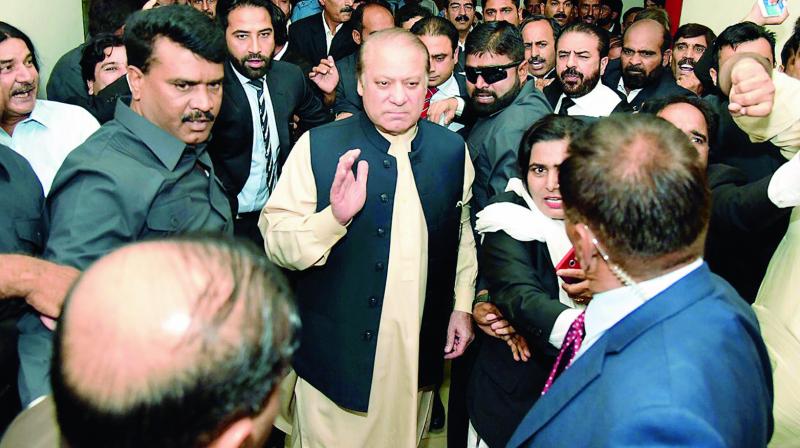 Deposed Pakistan Prime Minister Nawaz Sharif arrives at an anti-corruption court in Islamabad on Tuesday. Sharif made his first appearance before the court. (Photo: AP)

Islamabad: A Pakistani anti-corruption court on Tuesday decided to indict Nawaz Sharif on October 2 after the embattled ousted Prime Minister for the first time appeared before it to face graft charges against him in the Panama Papers scandal.

The accountability court also issued bailable arrest warrants for Sharif’s children Hassan, Hussain, and Maryam, and for son-in-law Captain Safdar. The court directed them to submit surety bonds worth Rs 1 million each to secure bail.

Mr Sharif, 67, stepped down after the Supreme Court disqualified him on July 28 from continuing in his office for dishonesty and ruled that corruption cases be filed against him and his children.

Mr Sharif appeared before the accountability court located in the judicial complex here, a day after he returned from London where he was with his ailing wife.

During the brief hearing, Mr Sharif informed Judge Muhammad Bashir that his wife was unwell and he needed to attend her. He was then allowed to leave the court.

The court then adjourned for 10 minutes before continuing with the normal case proceedings.

Later, addressing a press conference, Mr Sharif said that he appeared before the accountability court and declared that “I am clean.”

“I believe that God and the people of Pakistan are with me, and I hope that, somewhere, justice is alive,” he said.

“The whole country is being punished — the people and the generations to come. They have made a mockery of a progressive Pakistan on the track of democracy.

“I appeal that this country be allowed to progress in line with the Constitution. If the Constitution gives the people the right to govern, let them realise that right,” he said.

Mr Sharif’s court appearance on Tuesday was just a formality to ensure that he was ready to face the trial. He stayed at the court for about 10 minutes.

He was accompanied by his lawyer Khawaja Harris who would represent him as a counsel in the corruption cases.

The court had last week summoned Mr Sharif, his daughter Maryam and son-in-law Safdar to appear before it on September 26.

The Sharif family had skipped a court hearing on September 19.

When the hearing started again, the judge asked about Maryam, Hussain and Hasan, and Sharif’s son-in-law Safdar who were also ordered to appear on Tuesday.

Mr Sharif’s lawyer Harris said that they were in London to take care of their ailing mother but the court rejected the argument and ordered them to appear before it on October 2.