Later, water cannons were used against a makeshift barricade, marking the first time water cannon vans had ever been used in the city. 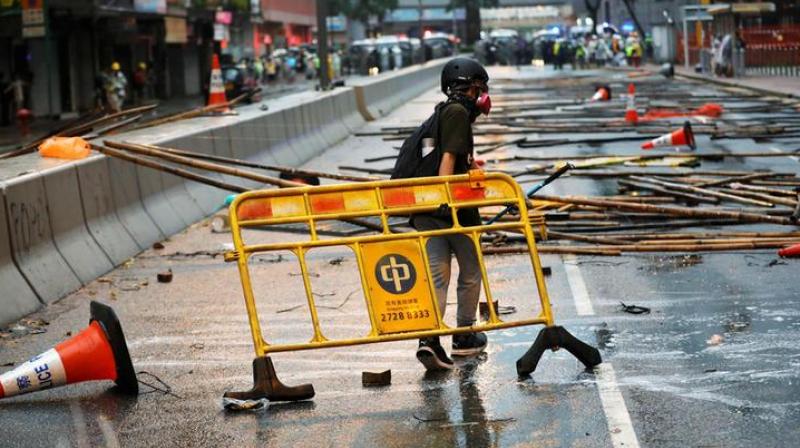 The officers involved are from the Emergency Unit of New Territories South and were deployed to contain extremely violent protesters who had vandalised shops and entertainment venues in Yi Pei Square in Tsuen Wan at about 8 pm (local time). (Photo: ANI)

Hong Kong: The administration of Hong Kong, along with the police, on Monday defended their act of firing bullets on the protestors for the first time since the beginning of the anti-government demonstrations across the special administrative region and arrests of dozens, including a 12-year-old boy.

The administration said that those arrested were caught for offences including unlawful assembly, assaulting officers and possession of offensive weapons.

Assistant Commissioner of police operations Mak Chin Ho, The Strait Times reported that Sunday's protests marked one of the violent demonstrations ever in Hong Kong that lead to the arrest of 86 people, including the youngest aged 12 and oldest aged 52.

The police at the same time also confirmed that around 21 officers sustained injuries during the clashes yesterday night.

In a briefing, Mak addressed the uproar over Sunday night's incident when six officers fighting off protesters in Tsuen Wan pulled out their pistols with one officer firing a warning shot to the sky as their lives were threatened.

The officers involved are from the Emergency Unit of New Territories South and were deployed to contain extremely violent protesters who had vandalised shops and entertainment venues in Yi Pei Square in Tsuen Wan at about 8 pm (local time).

"Over 100 rioters armed with offensive weapons surrounded and attacked our officers," said Mak, who added that the officers' protective gear was smashed.

"They charged at our colleagues with road signs, metal poles and long sticks repeatedly and recklessly. As a result, our officers sustained multiple serious injuries."

Meanwhile, China's state-run media outlet Xinhua news agency said that the central government had the "authority" and "responsibility" to intervene and prevent riots in Hong Kong.

Sunday's pro-democracy protests had begun peacefully. Thousands braved a thunderstorm to march from Kwai Chung to Tseun Wan district, in the city's New Territories. They showed up dressed in plastic ponchos and raincoats, and huddled under a sea of umbrellas.

But the violence returned Sunday evening when a smaller group of protesters broke away from the day's main police-approved march -- now a familiar feature of the protests. They used traffic cones and street railings to build makeshift barricades in the street and threw bricks, metal poles, and petrol bombs at police.

Tear gas was initially deployed but failed to disperse the group, CNN reported.

Later, water cannons were used against a makeshift barricade, marking the first time water cannon vans had ever been used in the city. Protesters were pushed back but couldn't be dispersed.